A 1919 ‘Announcement,’ in honor of National Nursing Week 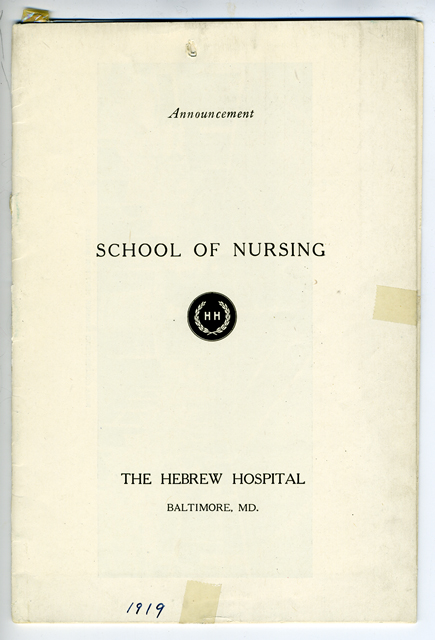 The Training School for Nurses of the Hebrew Hospital (in Baltimore, now Sinai Hospital) was incorporated in 1909. It was a necessity no well-run hospital could afford to be without. Training schools for nurses assured a steady labor supply; without trainees, the wards were impossibly short-staffed. By 1919, however, the nursing school was professional and well-appointed. Not only was there a dormitory for nurses called the Hecht Home, complete with a lecture hall, library and reading room; there was also an impressive curriculum, one copy of which survives today. 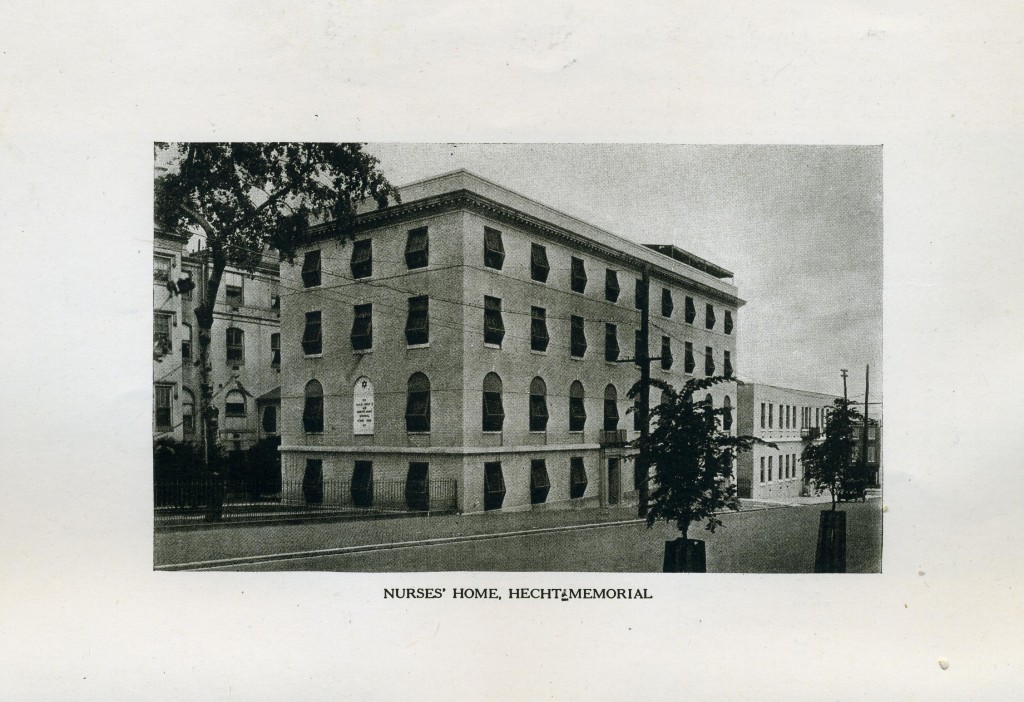 Like the college prospectus of today, the 1919 Hebrew Hospital “Announcement,” as it was called, is part sales tool. It also provides prospective nurses with comprehensive information about their upcoming educational experience, allowing us to imagine along with these young women of a century ago. 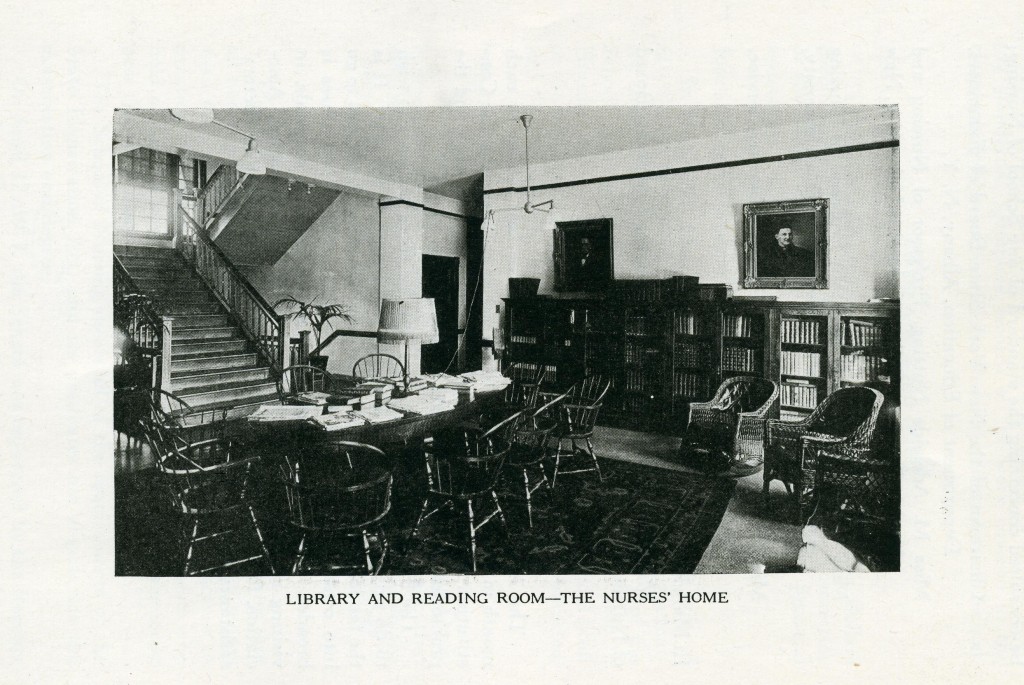 Incoming nurses were instructed to send their baggage to “Nurses’ Residence, 710 Rutland Avenue.” They were told to bring “three gingham dresses, ten aprons, a good supply of plain underwear, a dark sweater, a simple dress for evening wear, and a watch with a second hand.” They had to provide evidence of physical and dental examinations; they needed to be strong because they worked 54-hour weeks of shift rotations for three years. If they became ill, the hospital cared for them but they were expected to make up the lost time. After a four-month probationary period, student nurses were paid $10.00 per month for their work. 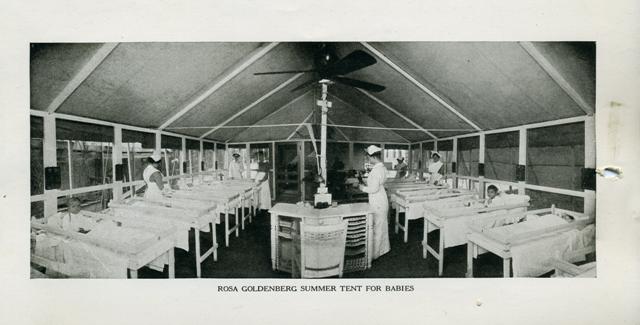 Nurses were taught anatomy, physiology, bacteriology and pathology in their first year, which was heavy on classroom hours and lighter on work on the wards. Coursework also included dietetics, materia medica (the therapeutic properties of the substances used for medicines), hospital economics, and the history and ethics of nursing, for a total of 337 hours in lectures and labs, or about 6 fulltime weeks for the year. The rest of their time was spent learning “on the job.” In the second year, classroom and lab instruction was cut to 101 hours, and dropped to 83 hours in the final year. Nurses had instruction and rotations on the children’s and adult’s wards, in obstetrical nursing, the operating room, and the dispensary, which was an outpatient clinic that served the poor. 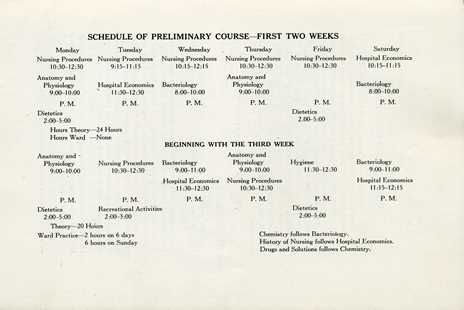 The Hebrew Hospital’s “Announcement” points out recent advances in the nursing field: “the nurse of twenty years ago saw only private duty before her, [but] the nurse of today may choose any one of thirty or more distinct lines of work.” Some of placements listed promise travel and adventure, such as military assignments or foreign mission work. Teaching and hospital executive positions may have appealed to those with strong organizational skills. Social service nursing, such as that pioneered by Lillian Wald and her Visiting Nurse Service, came with its own challenges and rewards. 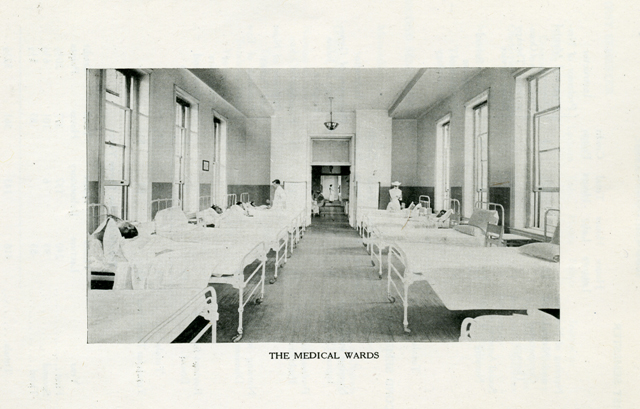 And then, perhaps to allay the reservations of parents of the young women the school aimed to recruit, the brochure points out that nursing education “is also one of the best preparations for homemaking. Its courses in dietetics and cookery, in management and sanitation, in personal hygiene, and in the care of children make it of very definite value to any woman.”

Baltimore’s Sinai Hospital (now part of the LifeBridge Health constellation of healthcare resources) opened in 1868. The hospital maintains a historical archive, which they kindly made available to us as we researched for Beyond Chicken Soup: Jews and Medicine in America. We are grateful for their help.