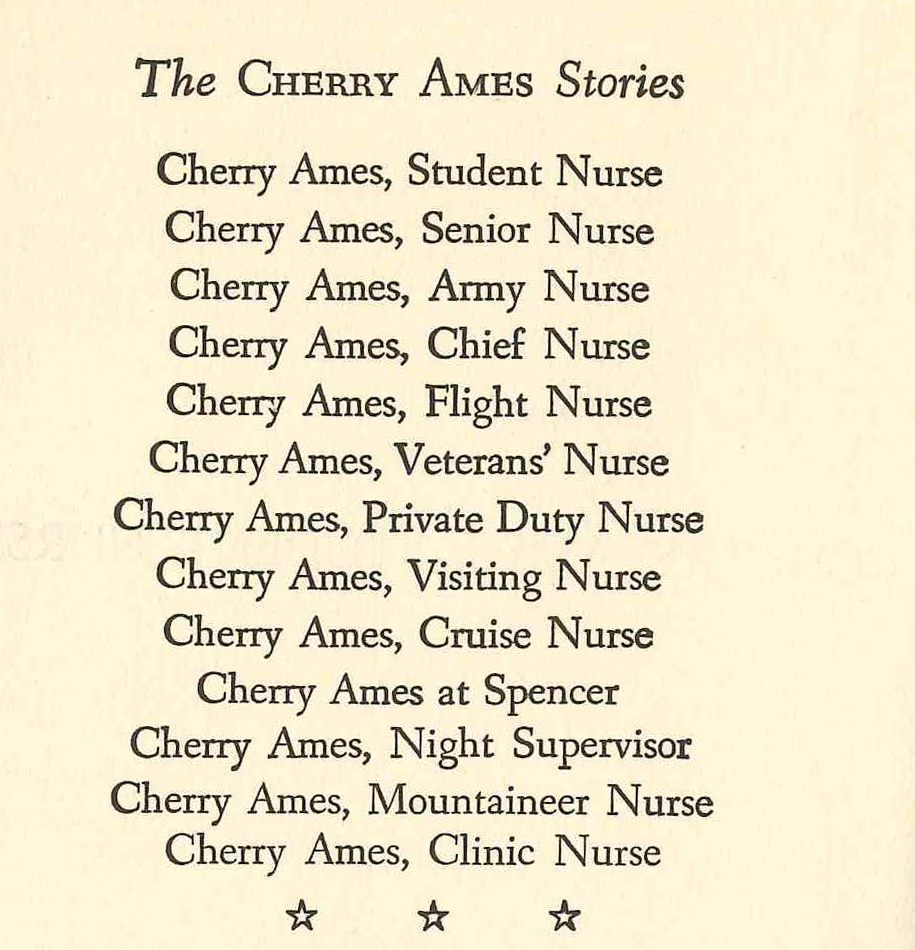 Nurses are a vital part of health care… and they also make great fictional heroes! As these examples show, there’s a long history of nurses starring in novels and comic books.

District Nurse (1932), by Faith Baldwin, tells the story of Ellen Adams, a young woman working in a large city for the Visiting Nurse Association. (Think “Call the Midwife,” but set in the US during the Depression, and with less midwifery.)  The jacket description emphasizes Ellen’s romantic travails, but the plot hinges on her dedication to her job and her relationships with her patients, tenement dwellers from a variety of ethnic backgrounds.  Baldwin doesn’t pull many punches; as the review linked above notes, her prose is franker than many novels written decades later, and describes Ellen’s working conditions in some detail. Nursing is no ‘easy way to find a husband’ job for Ellen Adams; she takes her career seriously, and understands its importance in the community.

Nurse Cherry Ames starred in a 27-book series for girls; the first, Cherry Ames: Student Nurse, was published in 1943.  Like her metaphorical sisters Nancy Drew and Trixie Belden, Cherry solved mysteries with the help of her friends, in locales both prosaic (nursing school!) and exotic (a dude ranch!), all while attending to her patients and honing her nursing skills. The first installments were published during World War II, and encouraged young women to consider joining the war effort by training for a much-needed role.  Here’s Cherry’s thought process early in her first novel:

“For all her hopes and dreams, she still was not entirely sure nursing was for her.  All the tales she had ever heard flashed through her mind – you see so much suffering, you scrub floors, you might give the patient the wrong medicine, and all the other nightmares. Probably nonsense, the whole lot of them.  Cherry wanted a profession of her own. More than that, she wanted to do vital work, work that the world urgently needs.”

Not to worry! Cherry makes it through her first year at school with flying colors.  On the last page,

“Cherry thought fleetingly back over the last year. Any lingering last doubts had been erased now, she had proven herself worthy, and she felt joyous and confident.”

What young reader would not want to achieve the same?

Linda Lark starred in a brief comic series, written by John Stanley from 1961-1963. In this issue, “No. 5: Nurse Linda Lark. . . Overseas Volunteer” (Dell, 1962), Linda, her cheerfully boy-crazy fellow nurse Charlie, and Drs. Allan Mayne and Joe Blasko heed the call of the US State Department and head off to Strovakia, a conveniently fictional European country, to help bring its health standards up to those of the developed world.

But! The efforts of this earnest foursome are quickly thwarted by a coy bandit, who takes a shine to Nurse Lark whilst terrorizing the countryside. When the Americans refuse to hand over half their profits to Coro and his band, Coro forbids the villagers from seeking treatment, which will… punish the American medical team, because they won’t have anything to do?  Force Nurse Lark into running off with Coro? The logic is fuzzy.  But then! The bubonic plague strikes the village, and Nurse Lark risks her life to go fetch the cure.  As she’s on her way back, Coro captures her;  he’s really in love with her, it seems (for one panel) like he might win her over – but then!! four panels later, he dies. Of bubonic plague.  Problem solved!  Nurse Lark brings the serum to the village, and they sort everyone out. Now if only Dr. Blasko would come clean about his feelings…

Plot shenanigans aside, the Nurse Linda Lark series had a serious side.  The first issue, “Linda Lark: Student Nurse No. 1” (Dell, 1961), included features on Florence Nightingale, nursing uniforms throughout history, and how to start and run a “Future Nurse’s Club,” plus a brief essay urging young readers to consider the benefits of joining “the noblest profession.”  Even when facing down medieval plagues, not to mention bandits who’ve read The Sheik a few too many times, Nurse Lark does not stray from her calling. A discerning reader can enjoy the implausible adventure, the potential romance, and the implied joys and rewards of a fulfilling career.

Though often presented by their publishers as romances – with the dramatic cover art, anticipated audience of women, and occasional genre snobbery that the label implies – these stories also offered their readers a chance to imagine the life of a working woman, earning a living and making a contribution to society. Whether or not you were reading for the clinch, you got a glimpse at a viable career option, and perhaps learned something about science, medicine, or a community other than your own. Representation matters! True, the heroines of these early-mid 20th century books typically stop working in the nursing field once they get married… but not before they’ve had a chance to prove their mettle in a real* crisis.  The lucky heroine of a series has additional chances to travel, test her limits, meet new people and learn new skills. Cherry Ames had over 25 jobs, from the Army to the jungle, and never let boys slow her down; Linda Lark might pine for Dr. Blasko, but she gets the business done and no mistake (bubonic plague and all!). Nursing is a serious profession, and even fictional nurses don’t mess around.

Want more?  In addition to the links included here, check out the Vintage Nurse Romance Novels blog and the companion blog focusing on romance novel covers; an image search or some judicious Pinterest sleuthing will also find you some great covers.  And I encourage you to actually read these and other books, if you find them.

*After all, a nurse’s work can sometimes be literally life or death.  A novel about, say, a museum collections manager would have to throw in a few Strovakian bandits in order to achieve a level of danger; a novel about my friend the emergency room nurse would require no such machinations.