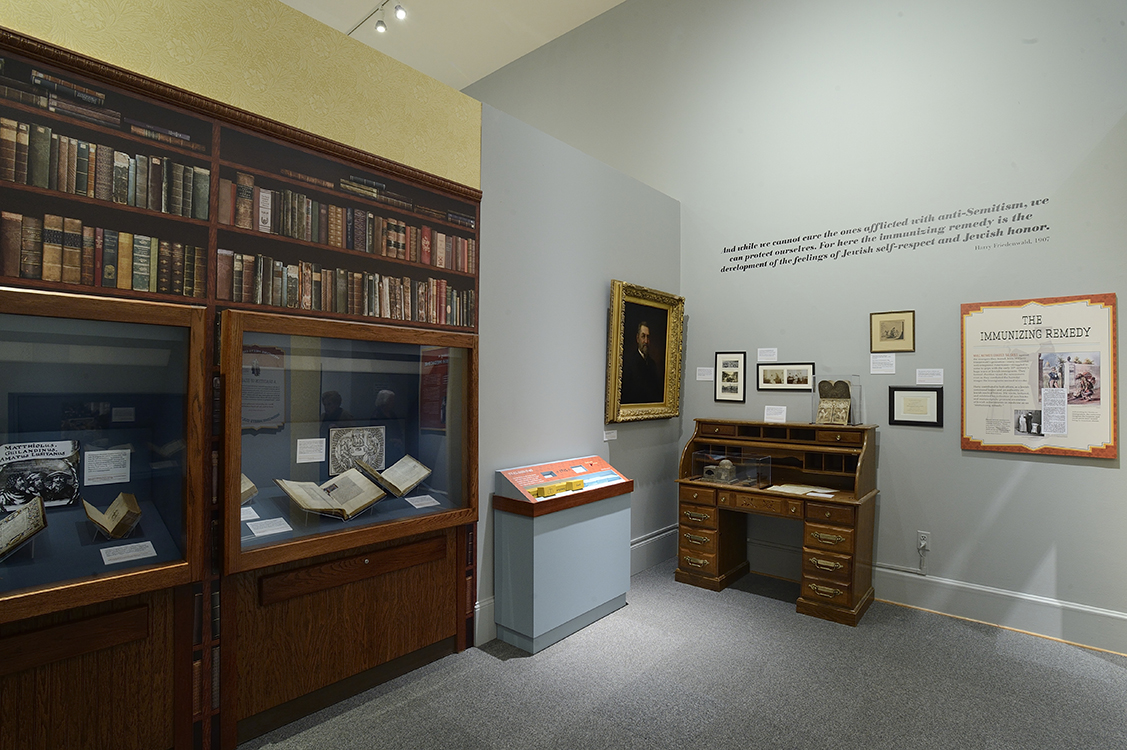 The roll-top desk in the Library may be a modern prop, but the desk accessories shown on top are the genuine article: a book stand, an inkwell, and a roller blotter, all part of a desk set made of damascened silver.

The set was purchased in Jerusalem in the late 1910s by Dr. Harry Friedenwald, while he was serving on the Zionist Commission. It was inherited by his son, Dr. Jonas Friedenwald, who continued to use it in his office.  In the mid 1950s Jonas’s widow Louise gifted the set to Dr. Jacob Handelsman, a Baltimore surgeon who had treated her; Dr. and Mrs. Handelsman donated it to the JMM in 1996.

Two of the pieces are unsigned, but the inkwell was marked by the designer: “Abraham Bar-Adon / Jerusalem Febr 1915.”  Abraham Bar-Adon (1885-1949) was born in Jerusalem, and attended the Bezalel School of Arts and Crafts; by 1909 he was in charge of the Damascene department. The school, today known as the Bezalel Academy of Arts and Design, was founded by Zionist artist Boris Schatz in 1906 to develop a unified Jewish design aesthetic; art historian Gideon Ofrat described Schatz’s goal as “a blend of art and sublime sanctity.” The resulting Bezalel style had much in common with the Arts & Crafts and Art Nouveau movements, with an Oriental flavor – and with a strong emphasis on Biblical motifs, Hebrew letters and texts as design elements, and imagery referencing the Holy Land.

There are many elements of the Bezalel style in evidence here. The inkwell is in the shape of Rachel’s tomb; among other inscriptions, it includes a line from Psalm 137: “If I forget thee, O Jerusalem, let my right hand forget its strength.”  The book stand is particularly delightful with its camels and small inset scenes of Jerusalem, amidst intertwined Hebrew characters and elaborate floral borders.

The pieces are functional, as you would hope your desk accessories would be, and they certainly show the effects of several decades of use … especially the inkwell, which has lost much of its inlay through wear and handling. (To see another example in more pristine condition, take a look at this one. The full set – a fourth piece, not in the exhibit, is a desk blotter with silver corners – would have made a striking display. More importantly, it also served as a reminder, both for the user and for office visitors, of Friedenwald’s work with the Zionist movement, and commitment to the art and culture of Israel.