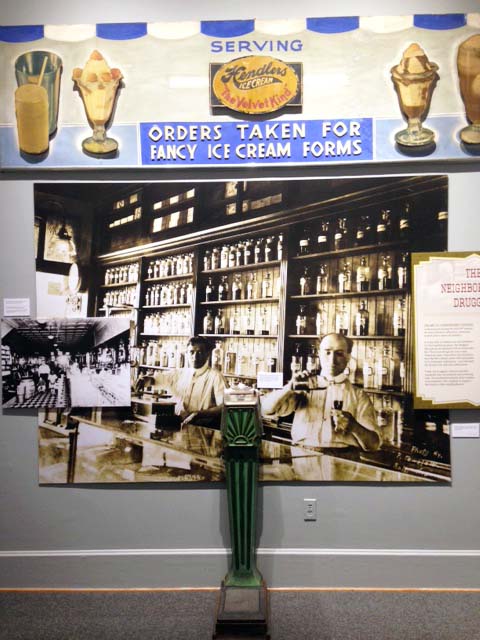 Featured in the Pharmacy section is a green metal standing scale.  Unlike the other table-top scales shown in this room, this was not for measuring the pharmacist’s medications and pills; instead, this one was meant for the customers’ use, to check their own weight.

Around the turn of the last century, penny scales allowed the general public to check their weight for (surprise!) a penny, at a lower cost and more conveniently than at a doctor’s office. The scales could be found at drug stores, movie theaters, boardwalks, department stores, train stations, banks, and other public venues around the U.S., helping people keep track of their weight – many, like ours, included height/weight standards for comparison – and providing a bit of extra income to the scale’s owner. (Perhaps for this reason, they seem to have been particularly popular during the Great Depression.) As the indoor bathroom gradually became standard for the American home, the more compact (and private) home scale, first patented in 1916, increased in popularity; by the 1970s the penny scale was more of an arcade novelty than a useful tool.

Our example is a “Bantam” penny scale, made by the Pace Manufacturing Company of Chicago in the early 1930s. it was designed to be both functional and decorative, with up-to-the minute Art Deco styling and a sleek chrome-plated top.

Though similar scales can be found today at auctions in restored and newly-pristine condition, ours still shows plenty of wear, with fingerprints on the green painted sides, and a rusty patina to the chrome-plating. However, its condition is evidence of its years of use, and for a history museum, that’s ideal.

This scale came from Kramer’s Pharmacy, at 1238 W. Mosher Street (at the corner of Carey Street), Baltimore, where it was put to use by Kramer’s customers for many years. In 1968 Julius Gordon, the donor’s father, purchased the pharmacy – the scale evidently conveyed to the new owner – and used the space as a liquor store, which stayed in the family until 2007.

My favorite part of this artifact is the fact that the final City of Baltimore inspection sticker is still intact and legible on the side, the top layer in a stack of many such stickers from years past.  Our scale was last inspected in 1965. Alas, at some point since then the scale stopped doing its job, at least not at 1965 prices – we tested it out with a modern penny, but no luck.