“The Profession of Medicine Has a Great Call upon the Jews:”

American Physicians and the Jewish Contribution to Medicine

by Mitchell B. Hart, professor of history at the University of Florida

“Every Jewish reader must feel proud,” the American Jewish physician Samuel Boorstein wrote in 1942, “and the non-Jewish reader very much impressed” with the findings presented in a recently published book, Jewish Contributions to Medicine in America. Boorstein added that the Jewish medical student, in particular, “cannot but feel proud of his heritage and be stimulated to seek to emulate these, his predecessors of Hebraic descent.” Boorstein’s review appeared in the Chicago-based scholarly journal Medical Leaves, founded by Jewish physicians in the late 1930s. It was, as editor-in-chief Abraham Levinson told potential subscribers, founded with the purpose of defending Jews and Judaism in the wake of the sustained anti-Semitic attacks that had led to the plight of Europe’s Jews under Hitler and his followers.

Images associated with the body—both the individual physical body and the collective metaphorical social body—and threats to its integrity, purity, and health had been central to antisemitism since at least the Middle Ages. Modern antisemitism made great use of ideas and imagery drawn from the world of health and disease to describe the Jew and the so-called danger posed by Jews to the nation and race. Most readers will be familiar with popular expressions of this notion, such as “dirty Jew,” or the way racial antisemitism drew parallels between Jews and vermin, parasites, rats, etc. Conversely, a Jew might appear to be clean or pure externally, but “Jewish blood” was by definition—literally, by nature—tainted and impure. Understandably, then, Jews and their non-Jewish allies took as one of their realms of interest the world of health and disease, and the Jewish contribution to medicine.

The literature on Jewish contributions to medicine cannot, however, be explained or understood solely as a response to antisemitism, though that clearly was instrumental. Narratives about Jews and medicine also gained force from the increased presence that medicine, physicians, and hospitals acquired through the nineteenth century. Both a medicalized antisemitism and a medicalized Jewish response must be understood within the larger context of societies obsessed not only with Jews and their enemies, but also with germs, bacteria, and parasites; with the infectious illnesses produced by germs; and with the scientists and physicians who discovered causes and cures and treated the sick and dying. The potential power derived by anti-Semites from linking Jews with the threat of contamination and disease, as well as the power derived by defenders of the Jews by associating Jews and Judaism with health and hygiene, came from the same source: the medical discoveries made in the last half of the nineteenth century and the consequent shift in the image of the physician and the profession of medicine.

Writers on Jews and medicine who were engaged with defending the Jews built upon these revolutionary discoveries to make their case that Jews and Judaism played a crucial role in the long history of health. American Jewish physicians represented themselves, if only implicitly, as the inheritors of a legacy that they were able and willing to continue in the New World. This argument gained greater urgency and relevance in the 1930s and 1940s, as it became evident that the United States (along with Palestine) was an increasingly significant center of Jewish life. This essay explores how American Jewish physicians and others mined the past in order to advance and promote an understanding of the Jewish contribution to medicine [and] analyzes their engagement with three historical periods: Antiquity, the Middle Ages, and modernity. 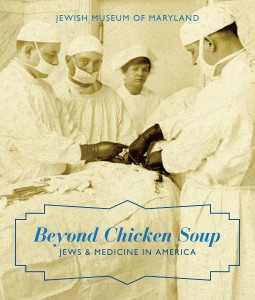