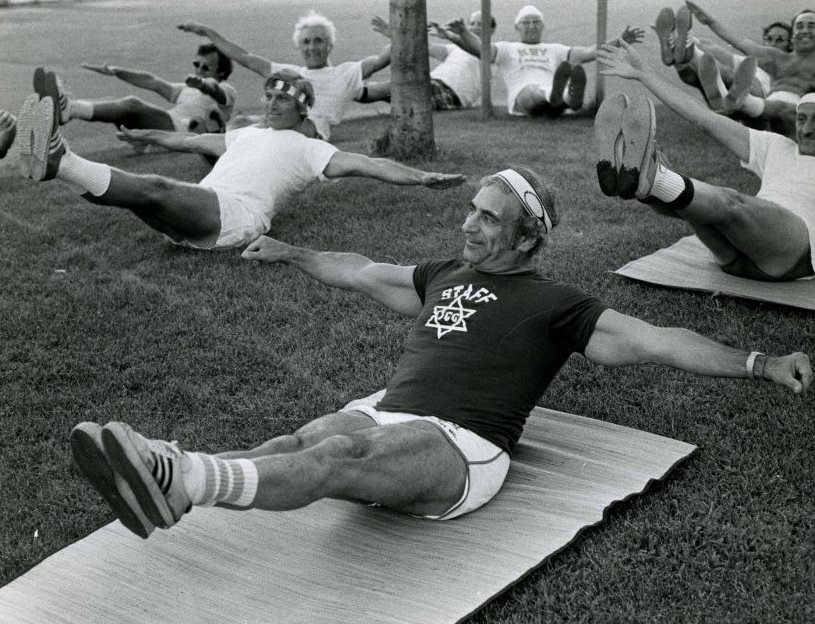 Some of these Fitness Fads Through the Decades posts have proved somewhat difficult to research, with a lack of interesting sources and images. Not so the Seventies!  A quick internet search instantly brought up numerous pages dedicated to the hilarious and puzzling exercise trends and equipment of that always-entertaining decade. (I was born in it, so I have at least half a leg to stand on, here.)  With headlines like “Strange and Terrible Fitness Products from the 1970s” and tagged with handy keywords like “mind-blowing” and “FAIL”, these recent articles show that sauna suits, vibrating belts, and basic bicycles have not fared well the test of time.  (Here are a few examples, minus the snark.)

The Eighties don’t score much better in today’s “OMG LOL”-minded view of the past, and I must admit that I am always amused by the earnestness and enthusiasm – which I myself never achieved in 9th grade gym class – displayed by the participants in, say, the 1988 National Aerobics Championships.

Burnt-orange exercise bikes, sparkly aqua spandex, and sweatbands for everyone might seem humorous today, but as always it’s important to remember that this was the real deal at the time. Yes, some people were in it to make money (and some did quite well), and yes, it seems unlikely that many people thought a vibrating belt thingy would be much practical use.  And many of these trends we so closely associate with recent decades are in fact much older; aerobics, Jacki Sorenson’s “aerobic dancing,” and Jazzercize were all first developed in the 1960s, and the belt vibrator was invented in the 1850s. However, countless Americans were able to improve their health, strength, and endurance by following these fitness fads, however quaintly nostalgic they seem now.  After all, those 1988 Aerobics Champions might look a trifle over-exuberant, but they’re also, obviously, extremely fit.

Much of the appeal – to both the entrepreneurs and the consumers – of these exercise styles and  gadgets lay in the fact that you could do it at home.  Buy yourself a stationary bike, a VCR, and some Jane Fonda’s Workout tapes, and you were good to go. Nevertheless gyms, fitness clubs, and rec center classes proliferated as well, offering the less motivated among us the chance to work out with friends, use the fancy equipment (without having to buy it) and learn from experts.  As usual, our JCC collection provides us with some prime examples of Baltimoreans taking advantage of the Jewish Community Center’s equipment and instructors.