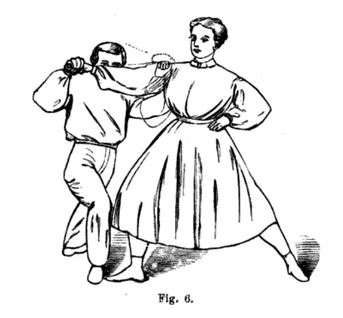 In the mid to late 19th century, many American doctors and educators studied, debated, and implemented the various scientific exercise programs being developed in Europe.  While some argued for the strict, nation-building German gymnastics and others favored the looser, flexible Swedish method, others preferred more obscure systems . . . or invented their own. (This debate is known by the commanding name “The Battle of the Systems.”) Regardless of which theory was chosen, the goal was the same: encouraging physical exercise and healthful knowledge, especially as a regular part of daily education.

An early American advocate for physical exercise in schools was Catherine Beecher, who believed strongly in the benefits of fitness training, especially for girls.  Among her many published treatises and advice guides is Physiology and Calisthenics for Schools and Families (1856), which claimed to be simple, scientific, and well-suited for both young children and adults.  In the preface, she argues, “it ought to be the official duty of one person to take charge of all that relates to the health and physical training of every collection of the young for education.”

Another early innovator was Diocletian Lewis, who may have one of the best Wikipedia introductory sentence ever: “Diocletian Lewis (March 3, 1823 – May 21, 1886), commonly known as Dr. Dio Lewis, was a prominent temperance leader and physical culture advocate who practiced homeopathy and was the inventor of the beanbag.”  In 1860 Dr. Lewis founded the Normal Institute for Physical Education in Boston in order to train teachers in gymnastics, and he opened several gymnasiums around the city.  Over the next two decades he published several works that laid out the advantages of his own particular system of regular exercise, which he believed was far better than any European import. The New Gymnastics for Men, Women and Children (1862) can be studied* online or, for a shorter read, here’s his article on the subject in the August 1862 issue of The Atlantic.

The idea of mandated fitness at the school level gained popularity throughout the late 1800s. Physical educators were hired at colleges and universities, particularly around New England; other teacher training schools opened, such as Dudley Sargent’s School of Physical Training in Cambridge, MA (which developed into the present-day Boston University College of Health and Rehabilitation Sciences). Interested parties held conferences to help promote their ideas, such as the one held in Boston in 1889 in order to “place before educators different systems of gymnastics, and to secure discussion of the same, with a view to clearly ascertaining the needs of schools, and determining how they may best be met.”

The exercises detailed in these various systems are based on gymnastics and calisthenics, designed for improvement in one’s overall strength and flexibility: arm and foot movements, stretches, basic moves with small weights, rings, bean-bags and the like… in other words, the staples of modern (or at least mid-20th century) elementary school P.E.**  However many, if not most, of the 19th century physical education teachers and scholars were vocally concerned with “hygiene” as well as fitness; indeed, the two concepts were inextricably linked.  These men and women were worried about the health of their pupils individually, and of society generally; some, like Dr. Lewis, were also anti-alcohol crusaders, while others looked to improve the lot of the elderly, “feeble,” and disabled who were in the community’s care.  Many were doctors, and significant portions of the exercise guidebooks contain lessons on bodily functions, nutrition, and other medical information along with movement diagrams and instructions.

It’s important to note that these motives were frequently more complicated than a simple desire to improve humanity. For a start, many of these educators came at their work from an explicitly Christian perspective, problematic enough for those audiences who did not share that perspective even without getting into issues of assimilation, privilege, and anti-immigration feelings.  (For more on those elements, visit the Beyond Chicken Soup exhibition and check out our Gymnasium section.)

In Baltimore, there was at least one gymnastics school by the early 1860s, and there are several references in the Sun to children at the German Orphan Asylum practicing gymnastics in the 1860s and 1870s. (I’ve not found any mention of such exercise at the Hebrew Orphan Asylum, though it’s certainly possible.)  And at the 1889 conference noted above, Dr. Alice T. Hall of the Women’s College of Baltimore was invited to speak on her implementation of the Swedish system at the school, after her careful consideration and observation of the various methods available.

Though there have been many other studies and methods over the course of the 20th century, it is thanks to the work of these late 19th century men and women that most children in U.S. public schools take P.E. or gym class. The names have stuck – physical education, gymnasiums – even if some of the activities have changed as new scientific information, and new fashions, are introduced.  The “Battle of the Systems” lasted officially for nearly 100 years, and though we may no longer argue between German and Swedish, Sargent and Delsarte, perhaps the battle is not yet over.

*Disclaimer: The JMM does not recommend any particular form of exercise – though you should probably make sure to get at least a little bit every day – and certainly does not advocate strict adherence to the methods of Mrs. Beecher or Dr. Lewis, though they are fun to read.

** Second disclaimer: The JMM is not responsible for any gym class flashbacks you may experience while reading these books.