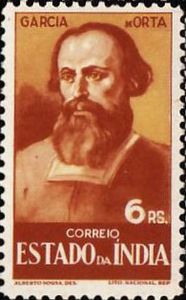 One person who made a major contribution to the understanding of modern medicine is a man named Garcia De Orta. I am sure that most people reading this have never even heard his name. He is famous for writing Coloquios dos simples e drogas e cousas medicinais da India (Conversations on the simples, drugs and materia medica of India), which was published in India in 1563. The book is famous for being the first non-religious book printed in Asia (the first two were of a religious nature). The book gave its contemporaries a foundation for understanding tropical plants and their medicinal qualities. The written style of the book is in the form of a dialogue between de Orta and a hypothetical Dr. Ruano who is new to the tropics of India.

Here is a page from De Orta’s book.

This section talks about the medicinal qualities of Cashews. Many of us today know that cashews are high in unsaturated fats which can help lower cholesterol levels and improve overall heart health. De Orta writes that cashews are placed in sour milk and this remedy helps people with asthma or worms.

For centuries his Jewish heritage was shrouded in mystery. Harry Friedenwald talks about this in his essay on Garcia de Orta from his book The Jews and Medicine: Essays published in 1944. De Orta began his career as a physician and even became a royal doctor to King Joao III. However his life began to crumble as he became well-known. Since he was from a family of conversos (Jews who converted to Christianity during the time of the inquisition), he was subject to the inquiries of the Inquisition. He left his job in Portugal and sailed to India in 1543. Although he seems to escape the Inquisition, his family is not as lucky. In 1569 (a year after Garcia de Orta’s death) his family, including his sister, was tortured. They eventually “confessed” to being Jews and even told officials that Garica de Orta was Jewish as well. The family was charged with their crimes and burned alive that same year. Inquisitors also decided to exhume Garcia de Orta’s body in 1580 and publicly burn his remains along with copies of his book.

Today Garcia de Orta is a celebrated figure of Portuguese history. He has been featured on stamps, coinage, and paper money. Two gardens, one in Goa, India and the other in Lisbon, Portugal are dedicated to de Orta. He is also remembered through two statues in Portugal. The statue in Lisbon is bronze and can be seen at the entrance of the Institute of Tropical Medicine. It was sculpted by Martins Correia and erected in 1958. A stone statue of De Orta is located at Praceta de Tomé which was sculpted by Irene Vilar in 1971. If you want to read (or just look at) Garcia de Orta’s book, check out this link for an English translation: https://archive.org/details/colloquiesonsimp00orta

Come see De Orta and learn more about the medicines mentioned in his book in Beyond Chicken Soup: Jews and Medicine in America.