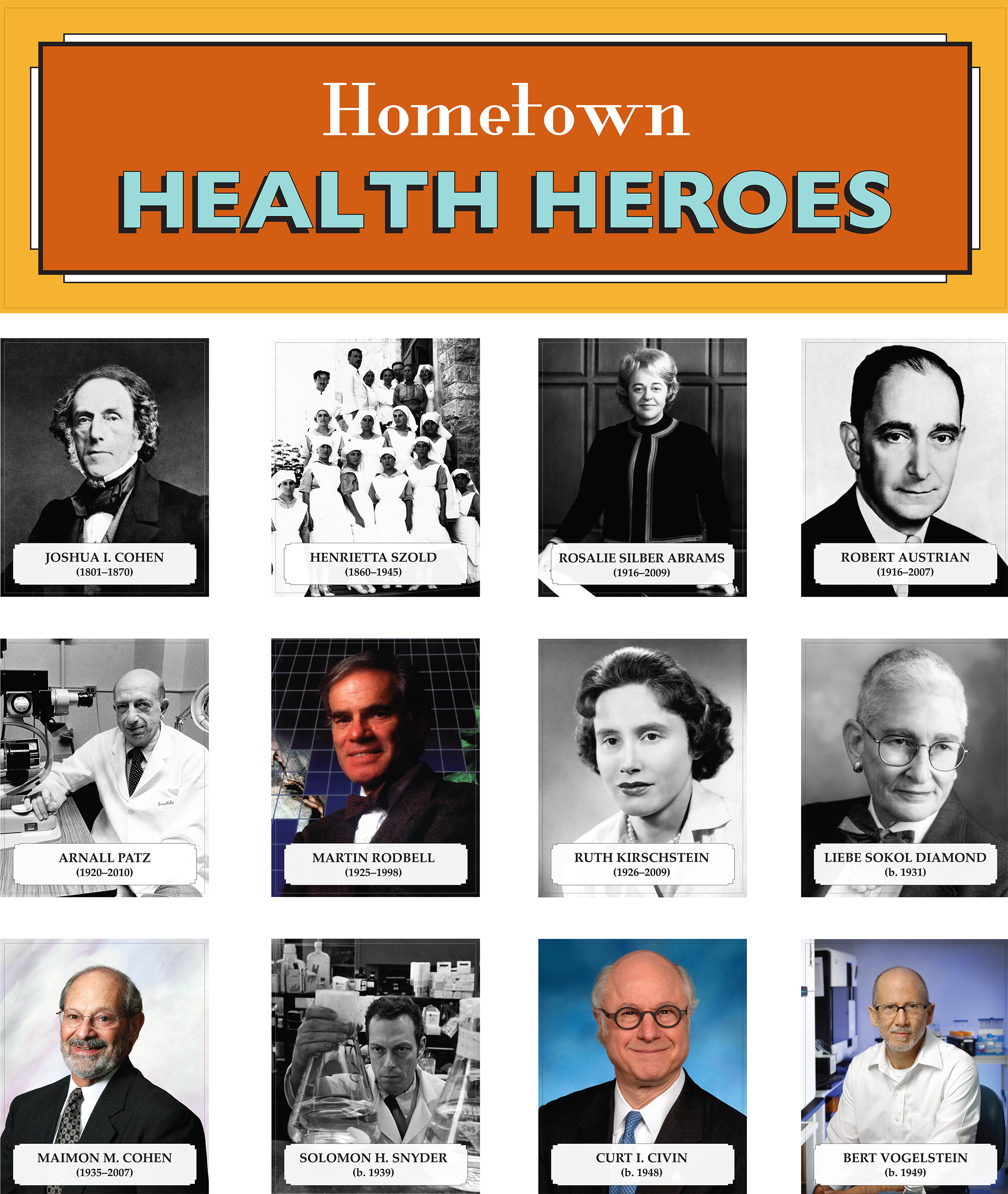 The Beyond Chicken Soup exhibition honors a short and eclectic list of Marylanders who have contributed in diverse ways to medical history: our Hometown Health Heroes. Not only did we whittle our selections down to a mere dozen, we had to describe their careers in only fifty words!  This series of blog posts seeks to augment the stories we told in the exhibition, expanding on the information already provided, and adding to the list of those named as Heroes.

We now invite everyone to nominate their own favorite Heath Hero. Send us a photo of your nominee with some details about his or her career, and explain why he or she is your hero. We will select from those nominated to be highlighted in an occasional feature on this website. You can send your nominations to kfalk@jewishmuseummd.org.

Joshua I. Cohen (1801-1870): One of the first Jewish physicians in Baltimore, where he pioneered specialties in the eye and ear. Graduating from the University of Maryland Medical School in 1823, he became the Medical and Chiurgical Faculty of Maryland’s first Jewish president in 1857.

Henrietta Szold (1860-1945): Founder of Hadassah, the Jewish women’s organization, Szold reformed medical care in early 20th century Palestine.  By the 1920s, the Hadassah Medical Organization included hospitals, clinics, and a nursing school. Hadassah was nominated for the Nobel Peace Prize in 2005, recognizing its equal treatment of patients of all backgrounds.

Robert Austrian (1916-2007): Devoted his professional life to conquering pneumococcal pneumonia. Working against the conventional medical wisdom of his day, he developed a vaccine to protect against the disease, and supervised clinical trials to prove its efficacy. He received the Albert Lasker Clinical Medical Research Award in 1978.

Arnall Patz (1920-2010): Ophthalmologist who discovered that high doses of oxygen delivered to premature infants caused blindness, and experimented with laser treatments for common eye diseases such as macular degeneration. Patz shared the Albert Lasker Clinical Medical Research Award in 1956 and was awarded the Presidential Medal of Freedom in 2004.

Martin Rodbell (1925-1998): Biochemist and molecular endocrinologist who discovered “G-Proteins,” which enable cells to communicate across membranes.  Rodbell’s concept of these proteins as “programmable messengers” has informed research in epidemiology, neuropharmacology, oncology, and gene therapy. He shared the Nobel Prize in Physiology or Medicine in 1994.

Ruth Kirschstein (1926-2009): The first woman director of a major institute at the National Institutes of Health, was a leader and mentor in the organization for half a century. She advocated for basic biomedical research and championed educational opportunity in science and medicine to all talented students, especially underrepresented minority students.

Liebe Sokol Diamond (b. 1931): In 1960 she became one of America’s first female orthopedic surgeons. Specializing in pediatric cases, she developed techniques for correcting limb abnormalities, such as clubfoot, that are standard today.  In addition to private practice, she served for many years as associate professor of orthopedics and pediatrics at University of Maryland.

Solomon H. Snyder (b. 1939): Known for his work identifying receptors for the major neurotransmitters in the brain and explaining the actions of opioids and other psychoactive drugs on the nervous system.  He directed the Johns Hopkins Department of Neuroscience, and received the National Medal of Science in 2005.

Curt I. Civin (b. 1948): Named the National Inventor of the Year for his 1984 discovery of a method for isolating blood-forming stem cells from other blood cells. This discovery led to the development of treatment for thousands of cancer patients and opened new directions in research on stem cells, leukemias, and transplantation.

Bert Vogelstein (b. 1949): Recognized for his work at Johns Hopkins School of Medicine uncovering the specific genes and mutations responsible for colorectal cancer and establishing a genetic model for cancer progression.  These discoveries have enhanced our understanding of the formation and development of all cancers.