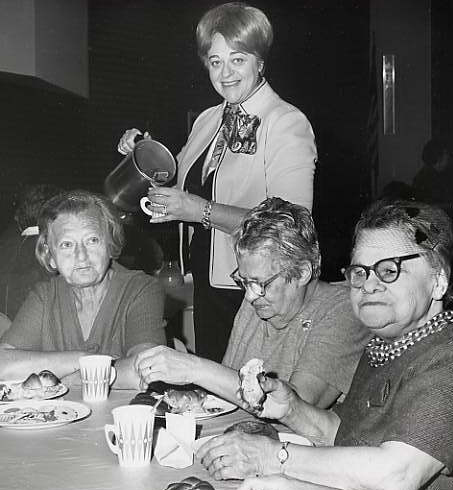 Folks from Baltimore know the Silber name. The Silber family ran a well-known and much loved bakery that at one time included almost fifty stores located throughout Maryland and Pennsylvania,. It was started by Rosalie’s grandfather, and built into a successful business by her father and mother. Rosalie and her siblings all worked in the bakery and its branches, even as they completed their educations and began to pursue other careers.

The family struggled as Rosalie and her seven brothers and sisters were growing up. While her father made a commitment to educate his sons, his attitude toward his oldest daughter’s education was, “Why do you need a college degree to change diapers?” * So when she graduated high school in 1933, Rosalie enrolled in a secretarial course and went to work for Judge Joseph Sherbow, embarking on a meandering journey that uniquely prepared her for a future in the Maryland State legislature.

After working for a short time as a legal secretary, Rosalie decided that she would prefer the occupation of nurse. She enrolled at the Sinai Hospital School of Nursing, graduating in 1938. She soon was head nurse on the men’s ward (“That’s where I learned my Yiddish, on the men’s ward. We used to sing them Jewish songs.”), transferred to the operating room, left Sinai to become a school nurse (Patterson Park High School), a public health nurse for Baltimore’s Eastern Health District, and joined the United States Navy Nurses Corps during World War II. Rosalie did it all, developing a broad knowledge of the delivery of healthcare services that would be useful in her government career.

When Rosalie married and gave birth to a daughter in the 1950s, she gave up her nursing career. By 1966, however, she was restless and made a decision to enter politics that, in her telling, sounds sudden and haphazard:

I remember being at home—oh, I was still in bed.  Lissa, my daughter, was there. She was about twelve years old.  We were lolling around. And people were calling me to help them run for office. So I turned to Lissa and I said, “You know what?   I think I’m going to run.”

I said, “Get dressed.  We’re going to go register.”

I couldn’t find my way.  First my friend told me I had to go to City Hall.  We went there and they said, “Oh no, you have to register in Annapolis.”  When I got to Annapolis, I was told, “No, you have to go over to the Supervisor of Election.”  And then I came back and I said, “They told me I have to register here.”  “Oh, yeah, I guess you do. Upstairs in the governor’s office.”  Finally, I learned I had to file in Baltimore. Anyway, when I got elected the guard at the Capitol said to me, “You won?  I told my wife, ‘She’ll never make it.  She can’t even figure out where to file for office.”‘

Rosalie turned out to be an extremely effective legislator, serving in the House of Delegates from 1967 to 1970 and in the state Senate from 1971 to 1984. In that time she introduced or sponsored some 300 bills (by her count), and made healthcare her signature issue. She and a hand-picked commission rewrote Maryland’s mental health code, and passed laws regulating involuntary commitment procedures. She introduced legislation updating the Nurse Practice Act. The Health Services Cost Review Commission, established in her first year in the Senate, was particularly significant,  reducing hospital costs in Maryland from the second highest in the nation at the time it was enacted to below the national average today. And she was very proud of getting state funding for Johns Hopkins Medical institutions first cancer research center: “a small thing, but really big thing,” she said.

She worked like a demon. She sat on the Finance Committee, the sub-committee on Health, was chairman of the Humane Practices Commission, and sat on the Commission for Women, which worked (unsuccessfully) to pass the Equal Rights Amendment.  In addition, she was vice-chairman of the Human Resource Committee, was a member of the Council of State Governments and advised the National Committee for Human Social Services. In 2000, long after her retirement from the legislature, she was given Maryland’s First Citizen award, recognizing a lifetime of truly heroic effort to improve the health of Marylanders.