July 22 – The First Baby Born at the New Montefiore Hospital 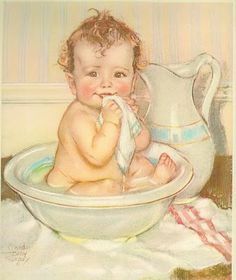 In the Hospital section, illustrating a panel about the introduction of modern maternity wards, is this charming little picture, captioned simply “The first baby born at Pittsburgh’s Montefiore Hospital after its 1929 renovation.”

A close look at the image itself tells us that the young gentleman is Ronald Montefiore Anatole, born July 22, 1929.  Yes, he was in fact named after the hospital in which he was born.

Montefiore Hospital, part of the University of Pittsburgh Medical Center since 1990, was founded in 1908 by members of the Ladies’ Hospital Aid Society to serve both the health needs of Jewish patients, and the training and career needs of Jewish doctors and nurses.  Less than ten years later the hospital had already outgrown its facilities, and work began to raise funds for a new building. After five years of dedicated work by Pittsburgh’s Jewish philanthropists, the new Montefiore opened in 1929.

Jules Anatole (1901-1981), born in Kaunas, Lithuania, and his wife Belle (1907-1982), born in Pennsylvania to Russian immigrants, lived in Pittsburgh; Jules was an assistant manager at an automobile company. In July of 1929, they had their first child, who also ended up the first baby born in the new Montefiore’s maternity ward. To celebrate, the hospital’s chairman, Leo Lehman, wrote the Anatoles a check for $100, and little Ronald rejoiced in the middle name Montefiore – in honor of the hospital, or of the hospital’s namesake, or both. His picture was taken, and he was recorded in the hospital annals as an important First.

This moderate fame lasted a little longer than you might expect; the community kept their eye on Ronald, it seems. On June 2, 1951, the Pittsburgh Post-Gazette published an update, under the headline “Boy Grew Older”: “The first baby born at Montefiore Hospital, a boy, arrived on July 22, 1929…. Tomorrow Ronald Montefiore Anatole will receive his diploma at the graduation exercises of Duquesne University, one of the top 10 in his class.”

The Anatoles eventually moved to Arizona, where Jules and Belle are buried.  If Mr. Ronald Montefiore is still with us, we want to wish him a very happy 87th birthday!