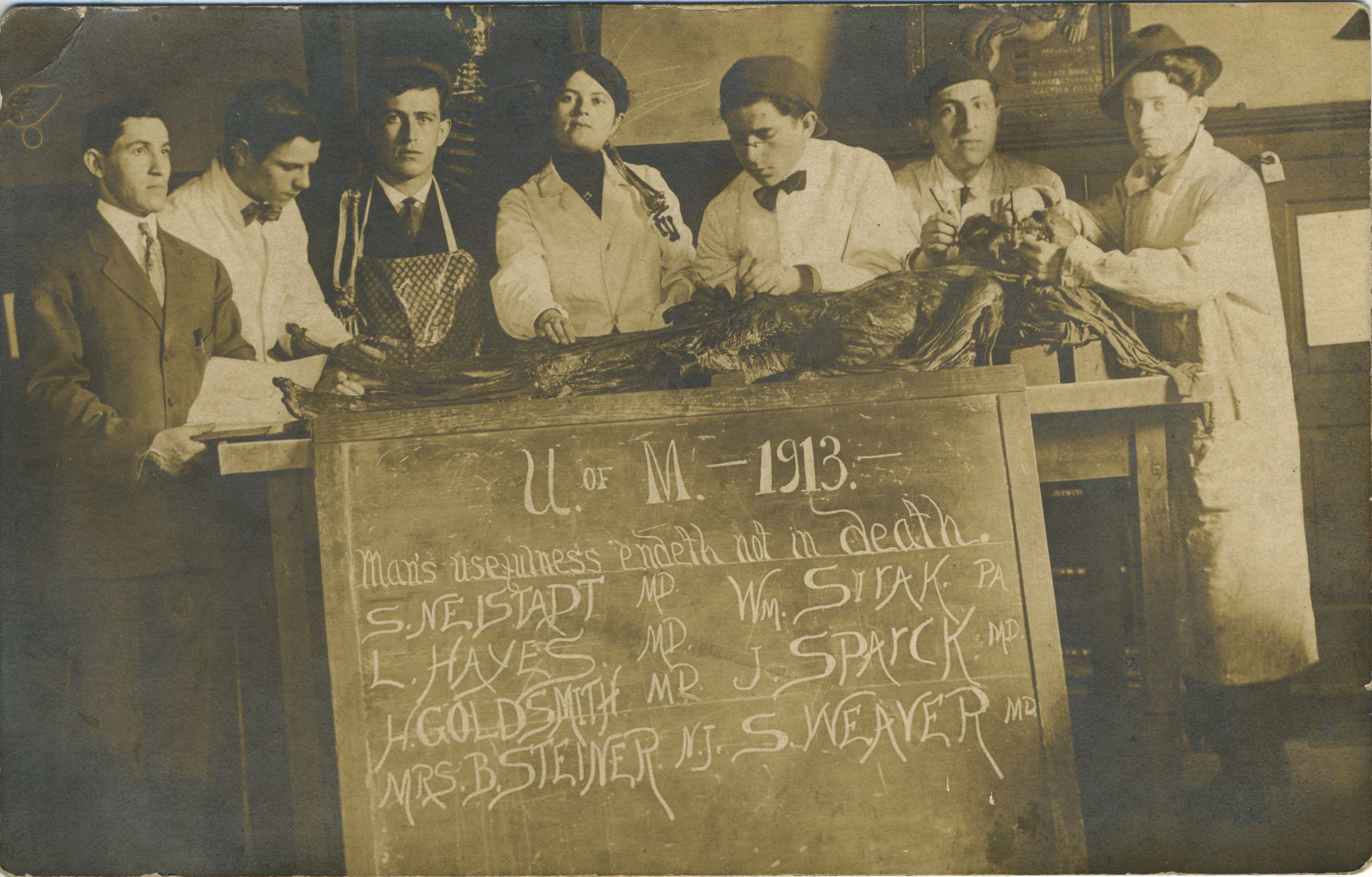 The two images below, of University of Maryland anatomy classes, are both featured in “Beyond Chicken Soup.” The one on the left is in the exhibit itself; the one on the right appears in our brochure.  Coincidentally, both show Dental School students, and date to within a few years of each other; they’re similar in composition, with a few variations. However, there’s one major difference that one might not expect to see: The group of students to the right includes a young woman, identified on the chalkboard in front as Mrs. B. Steiner of New Jersey. Once I spotted her, I wanted to learn more about her and her experiences in dental school over 100 years ago.

The history of the left-hand photo is fairly straightforward.  It’s conveniently dated “1903-1904,” and each of the students can be matched by name, home state, and class year to the annually published lists of University of Maryland Dental School graduates that can be found in a 1909-1918 compilation available on archive.org. The photo was donated to us by the daughter of Dr. Edmund Kahn, who can be seen second from the right, in his “MD ‘04” smock.

The right-hand photo, with its chalked motto “Man’s usefulness endeth not in death,” is proving much more difficult to sort.  The donor did not indicate her relationship, if any, with the subjects, or how she acquired it; and the same handy 1909-1918 book mentioned above seems to provide more questions than answers.

For one thing, our photo is dated – by the students themselves, on their chalkboard – “U. of M. 1913,” followed by their last names, first initials, and home states. Mrs. B. Steiner does appear in the school’s annual list… but only once, as a freshman attending the 1908-1909 session.  She does not seem to have ever graduated from the UMd dental school, and her name does not appear in other class lists through 1918.

For another, Dr. Samuel Neistadt graduated from the University of Maryland dental school in 1910 (which we knew anyway, thanks to a small collection of his papers donated by Dr. Louis Kaplan). In fact, he helped to found the Alpha Omega dental fraternity in 1908, while he was a student.  Perhaps he returned to school three years later, for a post-graduate anatomy refresher course? But even that idea doesn’t really play out as, most confusing of all, the rest of the students listed on the chalkboard don’t appear at all in the student or graduate lists of the UMd dental and medical schools.  So… how did this assortment of people wind up in an anatomy theatre at the University of Maryland?

Setting aside the question of the 1913 date, there are plenty of reasons why Mrs. B. Steiner is hard to track down.  She may have switched to another school, or gotten pregnant and had to leave her studies (temporarily or permanently), or simply decided to pursue another career or focus on the home.  A Paul Steiner, also in the dental school, graduated in 1909; perhaps this was her husband, and after his graduation the couple left the area?  (That might explain the 1913 photo giving her home as New Jersey, while the 1909 class list says she was from Maryland; was it a reunion photo of some kind, with friends invited in to pose around a cadaver? After all, the early catalogs inform us that “Access may be had to the [dissecting] rooms daily.”) But all of this remains only speculation; I’ve not been able to trace the Steiners in the census or other online searches. Without knowing Mrs. Steiner’s first name, I’ve had no luck in finding her outside of the 1909 student list – and this photo.

Alas, then, the search for Mrs. B. Steiner is still on.  I have had a tiny bit more luck with the two other women who can be found with her in the 1908-1909 student list, however: Dr. Georgiana P. Monks of Pennsylvania, class of 1909, went on to practice in Wellsboro, PA; and city directories show that Dr. Lena C.S. Sparck, class of 1910, had a dental office in East Baltimore in the 1910s and ‘20s.  One of these young women, or perhaps Mrs. Steiner again, appeared in this photo of “A Dissecting Class” from the Twenty-Eighth Annual Announcement and Catalogue of the Dental Department of the University of Maryland, Session 1909-1910, in which the three women are named as students.

The class is described in the 1909-1910 catalog as: “ANATOMY – Prof. J. Holmes Smith, M.D. – Anatomy will be taught in the most practical manner, not only by didactic lectures in the anatomical theatre, but by class demonstrations of osteology and syndesmology, under the supervision of an Associate Professor of Anatomy. The lectures on this fundamental branch of medicine and dental science will be amply illustrated with preparations ,models, plates, drawings and dissected cadaver. Special reference will be made to the anatomy, microscopical and comparative of the jaws, teeth, salivary glands and other organs and tissues, contained within or accessory to the oral cavity.”

(Interestingly, the photo chosen for the catalog is less jaunty than the two originals we have in our collection: the specimen skeleton in the background is just there, not carefully posed… and any illustrations, jokes, or student names on the chalkboard were removed in post-production.)

At any rate, let me put this out there: If anyone recognizes the women in these photos, or can shed any light on their careers, please let us know! Perhaps one day the search for Mrs. B. Steiner will be resolved.