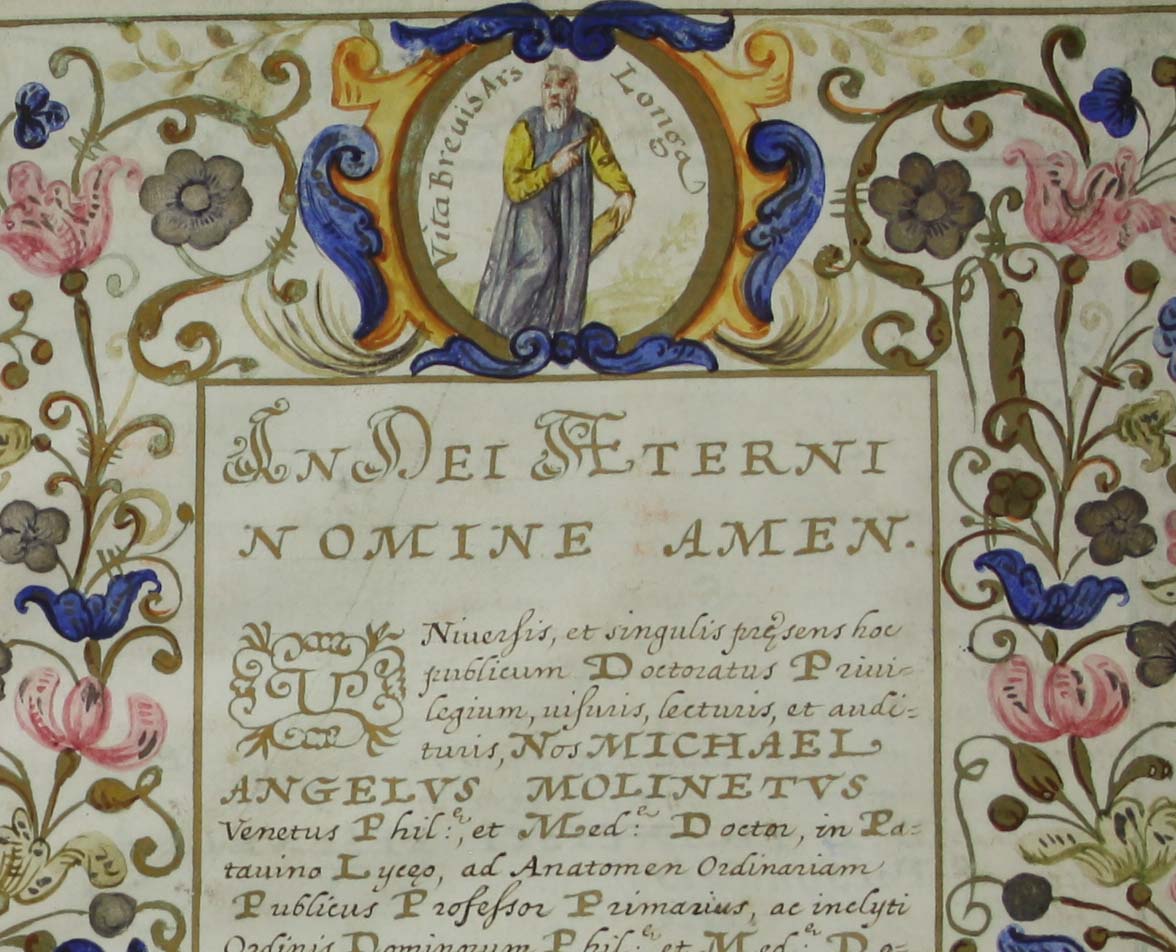 Harry Friedenwald’s beautifully illuminated, 1695 diploma of Jacob Mahler, a Jewish student from Bingen-on-the-Rhine, piqued my curiosity about the experiences of Jewish medical students in the Early Modern period. The diploma is similar in decorative style to others of the day, but the standard Latin text was altered in several instances to accommodate Mahler’s Jewish faith. Most prominently, the diploma begins with the phrase “In the name of the eternal God” instead of the typical “In the name of Christ.” It is also dated not in “anno a partu Virginis” (year of the Virgin birth) but simply “anno currente,” the current year. Finally, while most medical students stood for a final examination at the palace of the bishop, Jewish (and Protestant) student examinations took place at other locations—in the case of Mahler, “in loco solito examinatum Academie Patauiane,” in the usual place at Padua University.

The University of Padua’s medical school was established in 1250, and from the 16th to the 18th centuries was regarded as the best in Europe. If this reputation weren’t alluring enough, its policy of religious tolerance made it “the first, simplest, and usually the only choice” for European Jews who wanted to be physicians. While most Jewish students came from Venetian-held lands, including a swath of territory across northern Italy, down the east coast of the Adriatic Sea and as far away as Crete (Candia), a number also came from France, Germany and Poland.

Still, the number of Jewish graduates was small by today’s standards: 320 over a span of 200 years. And the authorities at Padua weren’t entirely enlightened. Tuition and fees for Jews were higher than for others, and they were sometimes “taxed” with special requirements such as hosting a feast for the entire student body upon graduation.

Padua’s Jewish students lived among and were supported by the local Jewish community, but they mingled freely with non-Jewish students and maintained continental networks of Jewish and non-Jewish Padua-trained physicians throughout their careers. Often, their sons and nephews followed in their footsteps, creating medical family dynasties several generations deep.

By the time Jacob Mahler arrived at Padua, the University of Leiden, in the Netherlands, was emerging as the more popular destination for Jewish medical students, especially those from Ashkenazi lands, like Mahler. Padua was venerable, however, and the high regard in which its graduates had long been held may have influenced Mahler’s choice.

This post quotes from Kenneth Collins, “Jewish Medical Students and Graduates at the Universities of Padua and Leiden: 1617-1740” (Rambam Maimonides Medical Journal, January, 2013). Other sources on medieval and early modern Jewish physicians include: Medicine and the German Jews, by John M. Efron (2001, Yale University Press); “The diploma of a Jewish graduate of medicine in Padua in 1695,” by Harry Friedenwald, first published in Annals of Medical History, 1929, and collected in his Jews and Medicine: Essays (Volume  1, 1944, Johns Hopkins University Press); Jewish Thought and Scientific Discovery in Early Modern Europe, by David B. Ruderman (1995, Yale University Press); and Jews, Medicine and Medieval Society, by Joseph Shatzmiller (1994, University of California Press).