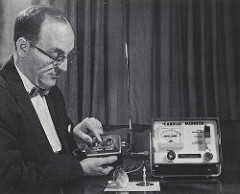 The history of the cardiac pacemaker is a long one, with many individuals over the centuries contributing to our understanding of – and regulation of – electrical impulses and the human heart. In Beyond Chicken Soup, we highlight two Baltimore physicians, Morton Mower and Michel Mirowsky, who invented the implantable defibrillator. However, they were not the only Marylanders to aid in the development of heart regulation devices; Morris Tischler (1922-2012), a Baltimore science teacher, invented a solid state or transistorized pacemaker.

After serving in the Army Signal Corps during World War II, Tischler earned a  bachelor of science degree from the Johns Hopkins University and a master’s degree from the University of Maryland, College Park; he went on to teach at Forest Park High School, Baltimore Polytechnic, and Baltimore Junior College.  In the 1950s, Tischler met cardiac surgeon R. Adams Cowley while teaching an adult education class in high-fidelity stereo electronics. Dr. Cowley offered Tischler a job at the University of Maryland Medical Center, and together they founded Electronic Aids, Inc. to develop cardiac regulatory devices. The company was manufacturing and selling the cardiac pacer and its monitor by 1958, and Tischler was granted a patent in 1963.

“This invention relates generally to surgical apparatus, and more particularly it pertains to electrical impulse generators for stimulating the cardiac nerves…. It is an object of the present invention, therefore, to provide a battery-supplied, transistor-operated pulse generating heart stimulator including repetition rate control and amplitude control of a generated unidirectional pulse and having provisions for either open or closed chest electrode use. Other objects of this invention are to provide a novel transistorized heart stimulator which is compact, which is economical to manufacture, efficient and reliable in operation, and which is easy to maintain.”

In addition to this invention, Tischler received eight other patents, and wrote over 120 text manuals in the fields of electronics, biomedical instrumentation, biotechnology and health education.  Though he is not always cited in the history of pacemaker development, Tischler held that his device was the first solid state pacemaker on the market, and it certainly had an impact on other inventors and later technological developments.  Among other honors, he was nominated for induction into the National Inventors Hall of Fame, and in 2003 he received the Radio Club of America’s Armstrong Medal “For Being a Pioneer in the Design of Cardiac Pacemakers and Continuing to Teach Electronic Technology in the U.S. & Abroad.”

Shortly after his death, Tischler’s widow Marjorie donated to the JMM her husband’s cardiac pacer model, which he had framed along with copies of the patent, and a modern-day implantable pacemaker for comparison. It’s clear that Tischler was proud of his contribution to the development of this life-saving technology, and rightly so.

More on Morris Tischler’s life and career can be found here and here, or in his two self-published memoirs in the JMM Library. For more details on the history of cardiac pacing, check out this article from “Images in Paediatric Cardiology,” 2006 Apr-Jun; 8(2): 17–81.