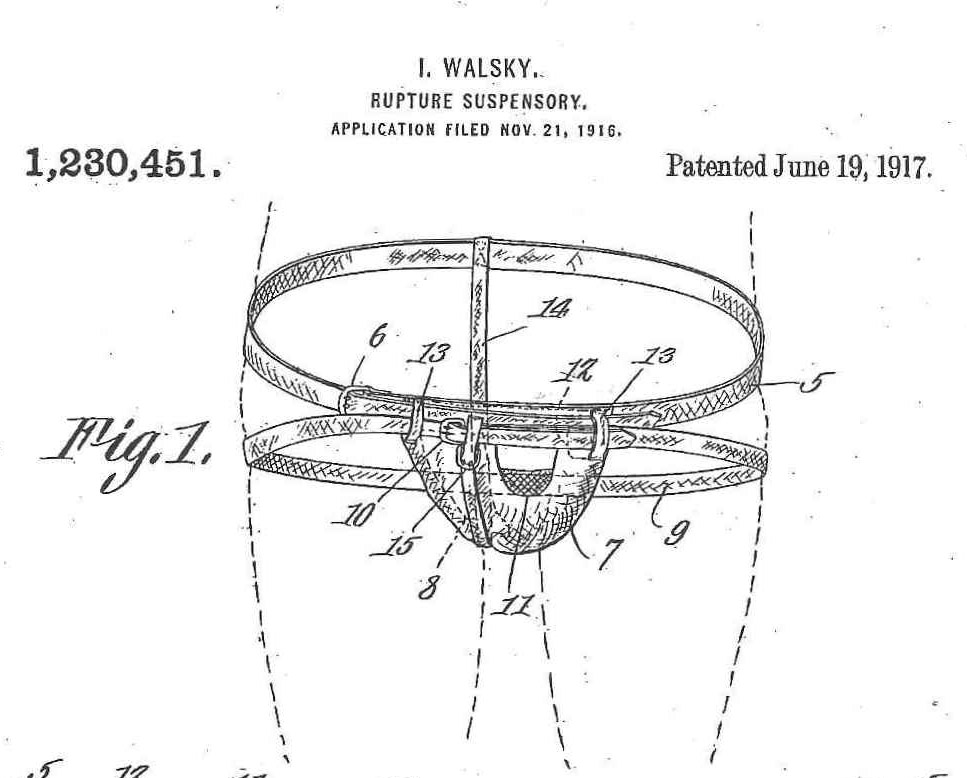 According to his descendants, Isaac Walsky of Baltimore “started as a tailor” (he later dabbled in real estate investment), and the family suspects that the idea for this invention – a type of undergarment for men suffering from inguinal hernias of the groin – came about because Mr. Walsky lived close to the Johns Hopkins Hospital, and thus both knew of the demand and had the skills to make a prototype.  (Let us hope, for his sake, that the cause was not a more personal one.)  Indeed, the 1917 Baltimore City Directory shows Isaac Walsky, tailor, living with his wife Fannie on E. Madison Street near N. Broadway, only a few blocks from the hospital.

The patent language explains, “This invention relates to appliances”, essentially support garments, “for treating hernias or ruptures.”  Though many patent applications refer to “improvements,” in this case, Mr. Walsky’s 1917 patent really was for an improvement, on his own earlier invention (No. 1,196,909, September 5, 1916) of a “Rupture-Suspensory”.  The new design does the old version one better by “providing an additional means for retaining or holding up the parts.”  (The rest of the description is less euphemistic.)

Though it’s not clear if Walsky’s invention was ever manufactured, let alone used at Johns Hopkins or other Baltimore hospitals, it did live on in some fashion: his work was cited in a 1975 patent for a “comfort athletic supporter.”