One of the interactive activities in Beyond Chicken Soup is the “Gene Screen” wheel, designed to give a brief demonstration of inherited traits and Mendelian probability.  Rather than use the familiar sweet pea-color example, we decided to change it up a little bit and use an animal instead.

Early discussion amongst the exhibit team used “pointy- or droopy-eared puppies” as the basis for the activity, but at some point it was decided to focus on an imaginary “critter” so as to avoid any accidental judgement about the two traits.  (As someone who thinks lop-eared bunnies are the cutest, I understand this point.)  The problem then became, what was our “critter” – and who was going to create it?

The task fell to me – you never know what skills will be called upon in the course of a museum career – and, sticking with the pointy-vs-droopy ears idea, I worked up these pig/donkey/rabbit/lion hybrids, which hopefully are cuter than that description might imply: 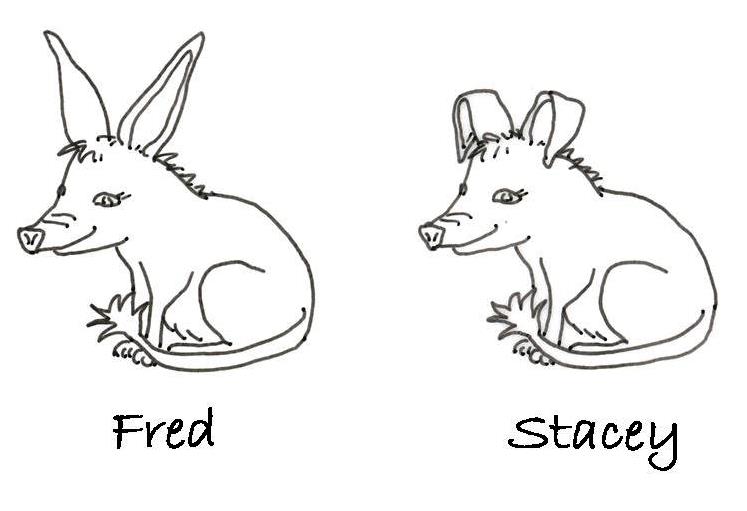 Since the two drawings needed to look as much alike as possible, I drew one body and two sets of ears, then brought out the tracing paper to make two complete versions. Now our little Critter siblings could let their ears shine, so to speak.

Ta-da! Fred and Stacey were born. The drawing of Fred also serves as pointy-eared siblings Carla and Gerry, as well as pointy-eared Mom and Dad Critter.  Yes, they have names! Haven’t you ever created something and known its name without having to think about it…?  Just me?  Well, at any rate, here they are, and we hope you’ll visit the exhibit to try your hand at the Critter family’s “Gene Screen” activity.