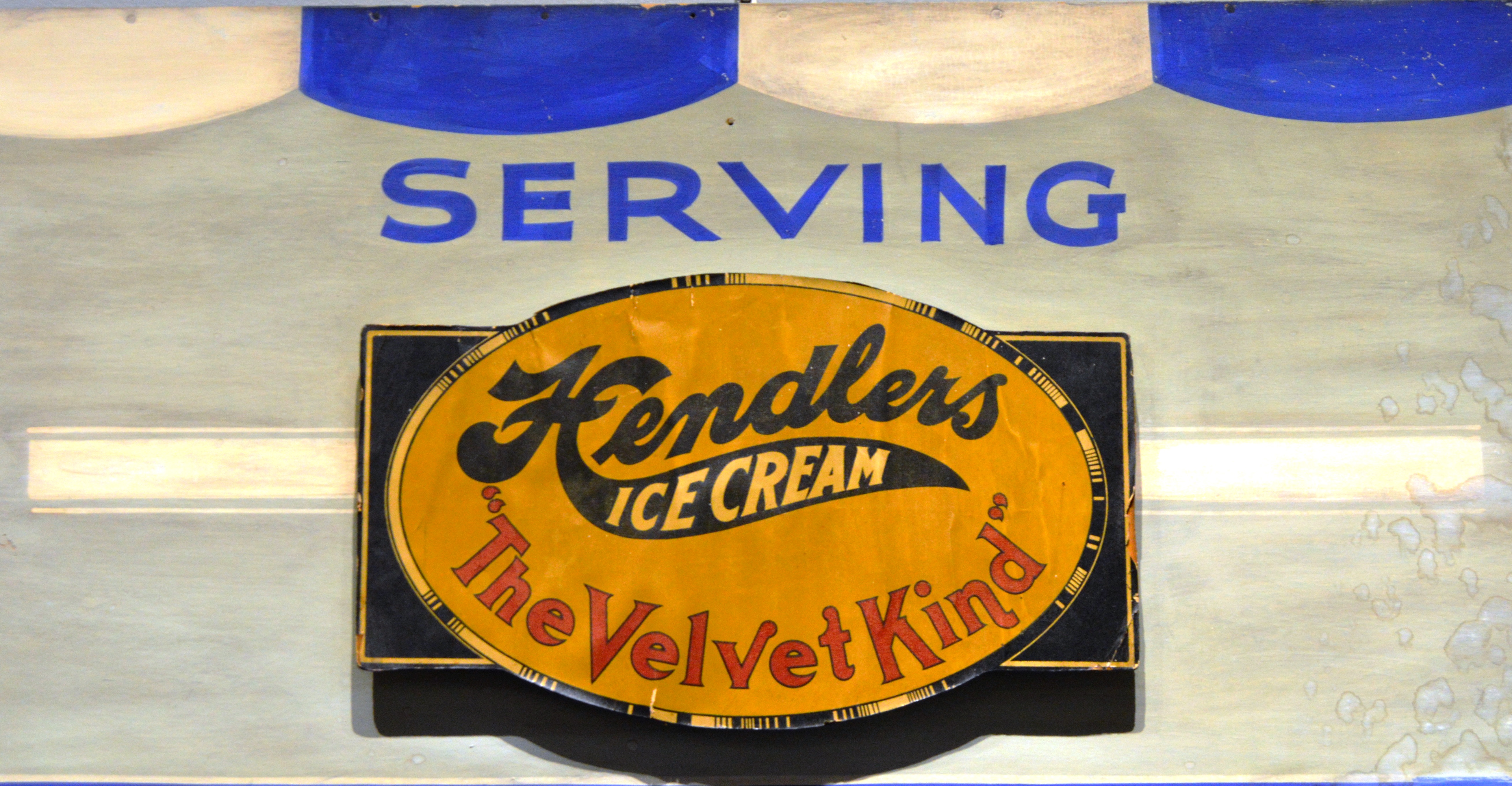 Featured in the Pharmacy section is a wonderful handmade soda fountain sign, advertising Hendler’s ice cream.  This recent (and most fortuitous) donation came from Sollod’s Pharmacy in South Baltimore.

In 1942, Sylvan J. Sollod (1911-2003), known as “Doc,” purchased Marmor’s Pharmacy at Fort Avenue and Webster Street.  The son of Polish immigrants David and Fannie Sollod, he grew up in Richmond and Baltimore and graduated from the University of Maryland School of Pharmacy in the 1930s. He worked in and managed other pharmacies around the city before turning Marmor’s into his own business, Sollod’s Pharmacy. (This is not to be confused with another Sollod’s Pharmacy around the same time, on North Avenue, owned by Joseph Sollod.)

In addition to prescriptions and medicines, Sollod’s Pharmacy served drinks and ice cream at the soda fountain, as was common in drug stores and pharmacies in the late 19th and early-mid 20th centuries. In a 1990 interview, Sollod’s wife Marian said, “We couldn’t have made it without the soda fountain; it was the busiest part of the store. On a hot summer night, before air conditioning, there would be a line formed while people waited for something cold to eat or drink.”

At some point – one family story is that the turning point came when a city worker tried to solicit a bribe in return for an easy food service inspection – Dr. Sollod closed up the fountain, though he left the workings in place.  After Sollod’s  retirement in 1990 the new property owner, Earl Gallion, revived it by opening Ye Olde Malt Shop in the space. The marble-topped counter was there waiting to be put to use, and so, it turned out, were the original advertising signs, hidden behind a temporary wall that had been installed years earlier.

The Olde Malt Shop was soon as much of a South Baltimore fixture as Sollod’s Pharmacy was in its day, cited by some as providing the best milkshakes in the city, and even featured on the TV show “Rachel Ray’s Tasty Travels.” In 2004, Penny George and Mark Trunk took over the day-to-day operations from Gallion (you can see them in action in “Tasty Travels”). Unfortunately, the economic downturn of 2008 hit Gallion hard, and he had to sell the building; since they owned the contents but not the shell, George and Trunk rescued what they could from their beloved Malt Shop before it closed for good.  Thankfully for us, they offered the fabulous ten-foot sign to the JMM just in time for its inclusion in the Pharmacy, to remind our visitors of the soda fountains of old.