What’s On Your Plate 1920: Jazzing Up the Dinner Table 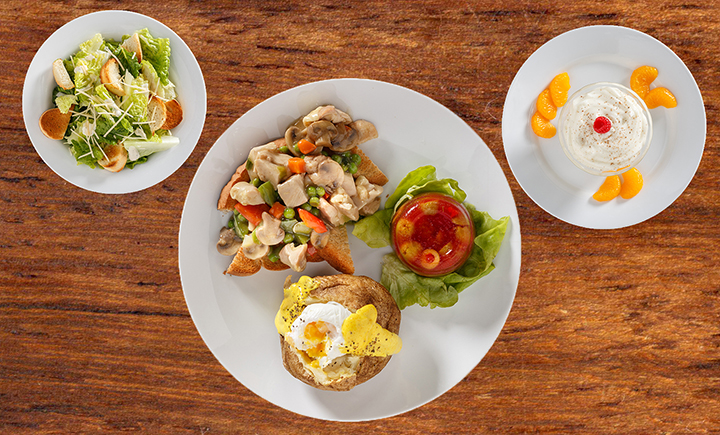 On the Discovery of Vitamins

The Newer Knowledge of Nutrition: the use of food for the preservation of vitality and health by E.V. McCollum, 1918: View book here. 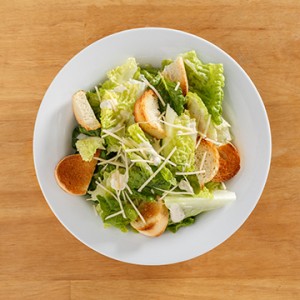 The Caesar salad remains one of the most popular salads in America to this day, but it was truly born in the 1920s. It’s creation is generally attributed to Caesar Cardini and his restaurant in Tiajuana – his daughter Rosa credits an especially busy 4th of July weekend that forced the kitchen to become creative with very few ingredients. Mr. Cardini added tableside preparation to create a dramatic flair for what is, at its heart, a simple recipe with minimal ingredients. source.

Check out Julia Child sharing her childhood memory of Caesar salad (and her demonstration of how to make this classic salad).

More on the history of Caesar salad: The Caesar Salad Was Invented In Mexico. Surprised? 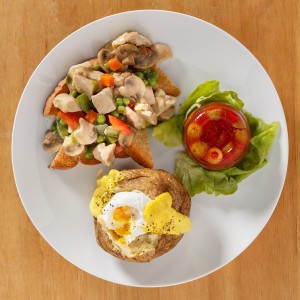 The origin of Chicken a la King has never been confirmed. While Delmonico Restaurant in New York and the Claridge Hotel in London are both mentioned regularly, most sources  point to the Brighton Beach Hotel in Brooklyn as the most likely source. The story goes that the hotel’s chef George Greenwald prepared it “for the owner of the hotel, E. Clark King,” who liked it enough to add it directly to the menu. source.

According to the New York Public library’s menu archive chicken à la king “appeared on more than 300 menus between the 1910s and the 1960s.” source.

We used this recipe for our Chicken a la King – note that it contains no chicken broth, an important distinction between chicken a la king and its soupier cousin, chicken pot pie filling. 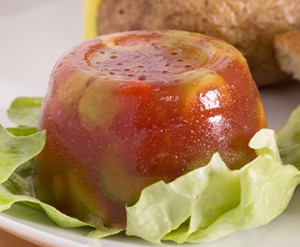 No 1920s menu – particularly a luncheon menu, was complete without the presence of Aspic. Gelatin salads were considered “dainty and refined” while being affordable. Serving these aspic dishes was a way for “ordinary women to aspire to a higher social status.” source.

Our tomato aspic recipe included pimento-stuffed olives, chopped celery and Worcestershire sauce, reminding one of a particularly wobbly bloody mary. Here’s a much more delicious looking way to enjoy tomato aspic – in the belly of an avocado!

And in case you’re feeling motivated to try your own: 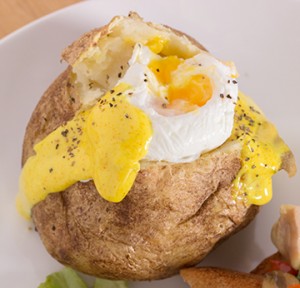 “I sing the praise of Hollandaise,

A sauce supreme in many ways.

Not only is it a treat to us

When ladled on asparagus,

But I would shudder to depict

A world without Eggs Benedict.”

Hollandaise is “so named because it was believed to have mimicked a Dutch sauce for the King of the Netherlands’ state visit to France.” source. Hollandaise traces its cooking roots to the classic “sauce blanche,” an egg yolk and butter sauce meant to magnify the flavors of the food it accompanied. This represented a major shirt from the spicy, sweet, and sour sauces of medieval and Renaissance cooking. Sauce blanche “was one of the fundamentals of the new French cuisine in the delicate style, which was driven by the variety and quality of fine principal ingredients rather than complicated seasonings.” source.

Julia Child demonstrates the making of Hollandaise sauce in this episode of The French Chef.

The science of Hollandaise

And if you want to give your brain a real academic workout, check out this paper on the chemistry of hollandaise preparation:

Hollandaise sauce and the chemistry behind old and new preparation techniques by Anu Hopia, Merja Sillanpää, and Maiju Tuomisto 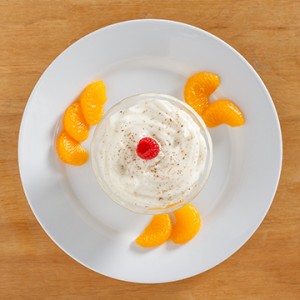 “The history of Bavarian cream is a bit murky. In France, the dish is known as Bavarois, and the French claim that it was invented in Switzerland, or possibly Germany. French chefs may also have learned the dish through employment by Bavarian royalty. In either case, the dish appears to have emerged in a recognizable form in the late 1700s, and it may in fact have been developed by Marie Antoine Careme, a famous French chef from the late 18th century.” source. You can read more about Chef Careme here.

True Bavarian creams, like the one pictured on our plate, first appeared in the U.S. in Boston Cooking School cookbooks, by Mrs D.A. Lincoln, 1884, and by Fannie Merritt Farmer, 1896. What we think of as a Bavarian cream today (like the donut)are in fact simply pastry creams.

But we can’t move on from the 1920s without a discussion of the pineapple upside down cake. The concept of upside-down cakes is an old one (read a quick history here!) but the pineapple upside down cake began to grow in popularity when an engineer employed by James Dole “invented a machine to cut his pineapples into nice rings…The invention of the maraschino cherry added the necessary color needed to make this cake stunning.” source. The dessert’s reign as king was cemented in 1925 when a contest sponsored by the Hawaiian Pineapple Company (now known as Dole), received 60,000 submissions where 2,500 “were recipes for pineapple upside-down cake. The company decided to run an ad about the flood of pineapple upside-down cake recipes it had received, and the cake’s popularity increased.” source.  Fun fact, April 21 is celebrated annually as National Pineapple Upside-Down Cake Day.

Calories & Reducing: Dieting in the 1920s 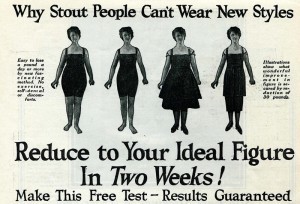