What’s On Your Plate 1950: Prosperity and Preservatives 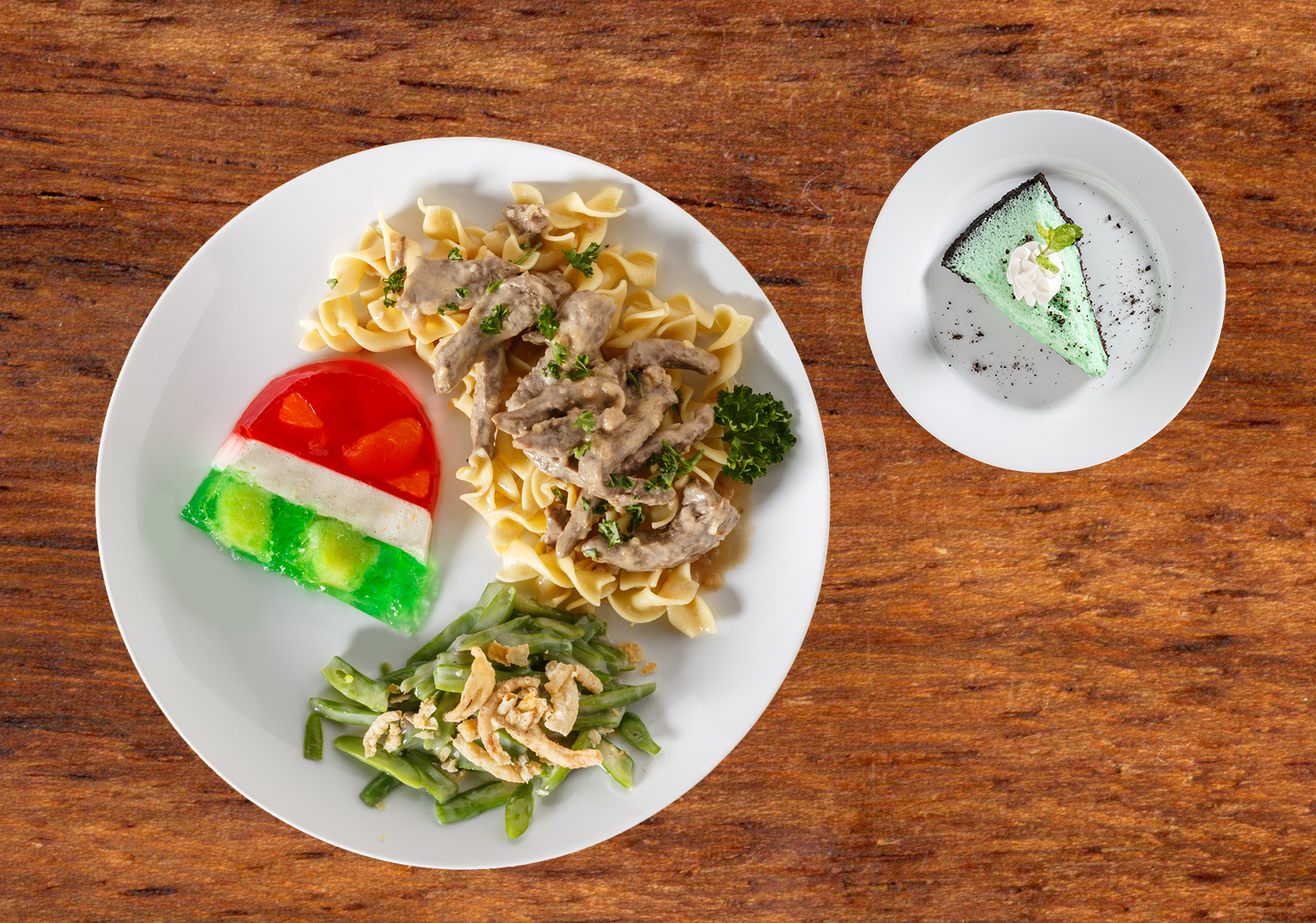 In the prosperous 1950s, advertisers promoted convenience products that brought the latest technologies into the kitchen, so that busy housewives could produce home-cooked meals with ease. Casseroles with cans of cream soup as their base were popular dishes, considered nutritious because they were enriched with vitamins and stamped with the approval of health experts.

Have you lost the “art” of family dinners? Watch “A Date with Your Family!” 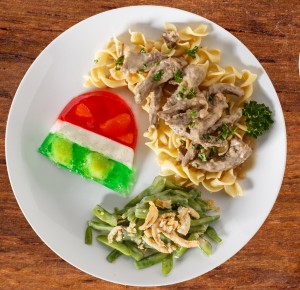 Beef Stroganoff – Russian by way of France…and then on to America? Check out its earthly travels through this great post, Around the World with Beef Stroganoff

The first known recipe for beef stroganoff was published in the 1871 edition of the Russian cookbook A Gift to Young Housewives. Originally served topped with “straw potatoes,” in the United States, it is commonly served over pasta (usually egg noodles!).  Although beef stroganoff is widely considered a dish of the 1950s, it appeared in American cookbooks starting in the 1930s.

Green Bean Casserole
This American Thanksgiving “staple” was invented in 1955 by home economist Dorcas Reilly, who worked at the Campbell Soup Company in the test kitchen. Did you know it was originally called the “Green Bean Bake” – and “so many home cooks requested the recipe (more than 10,000 in a year, according to the soup company), [Campbell’s] started printing it on the soup label.”

In 2002, Reilley presented the original green bean casserole recipe to the National Inventor’s Hall of Fame.

Jello Fruit Salad
A Social History of Jell-O Salad: The Rise and Fall of an American Icon

Can gelatin be Kosher?: The Gelatin Question
Check out Jello’s advertising through the decades.
Ready to make your own?

Not too sure about trying them yourself? Live vicariously through “Making, and Eating, the 1950s’ Most Nauseating Jell-O Soaked Recipes!”

Grasshopper Pie, believe it or not, has little to do with the insect! It was most likely born as a commercial hybrid to promote a popular green-colored cocktail of the same name. Its popularity in the 1950s and 1960s is no surprise, as chiffon pies were all the rage during these eras. Made with crème de menthe cordial, gelatin, and whipped cream, encased in a chocolate cookie crust. A popular variation is the frozen grasshopper pie, made with mint chip ice cream – the greener the better! 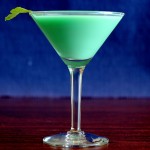 The Grasshopper Cocktail:  While the exact date of its creation is up for debate (though we’ve pinned it down to the prohibition years!), the cocktail’s creator and place of origin are widely agreed on: this brilliant green beverage was mixed up by Philibert Guichet Jr., owner of Tujaque’s bar and restaurant in New Orleans. We do know that Mr. Guichet submitted his recipe for the grasshopper to a cocktail contest in New York City in 1928 – the drink took second place!

Disappointed about the lack of actual bugs? Check out this list of insect recipes!

A top choice for weight loss? Prayer. “Pray Your Weight Away,”by Reverend Charlie Shedd, was published in 1957 was a best-selling book.

The TV Dinner is introduced!

For Your Entertainment: Eating Weird Food from the 50s with Katherine