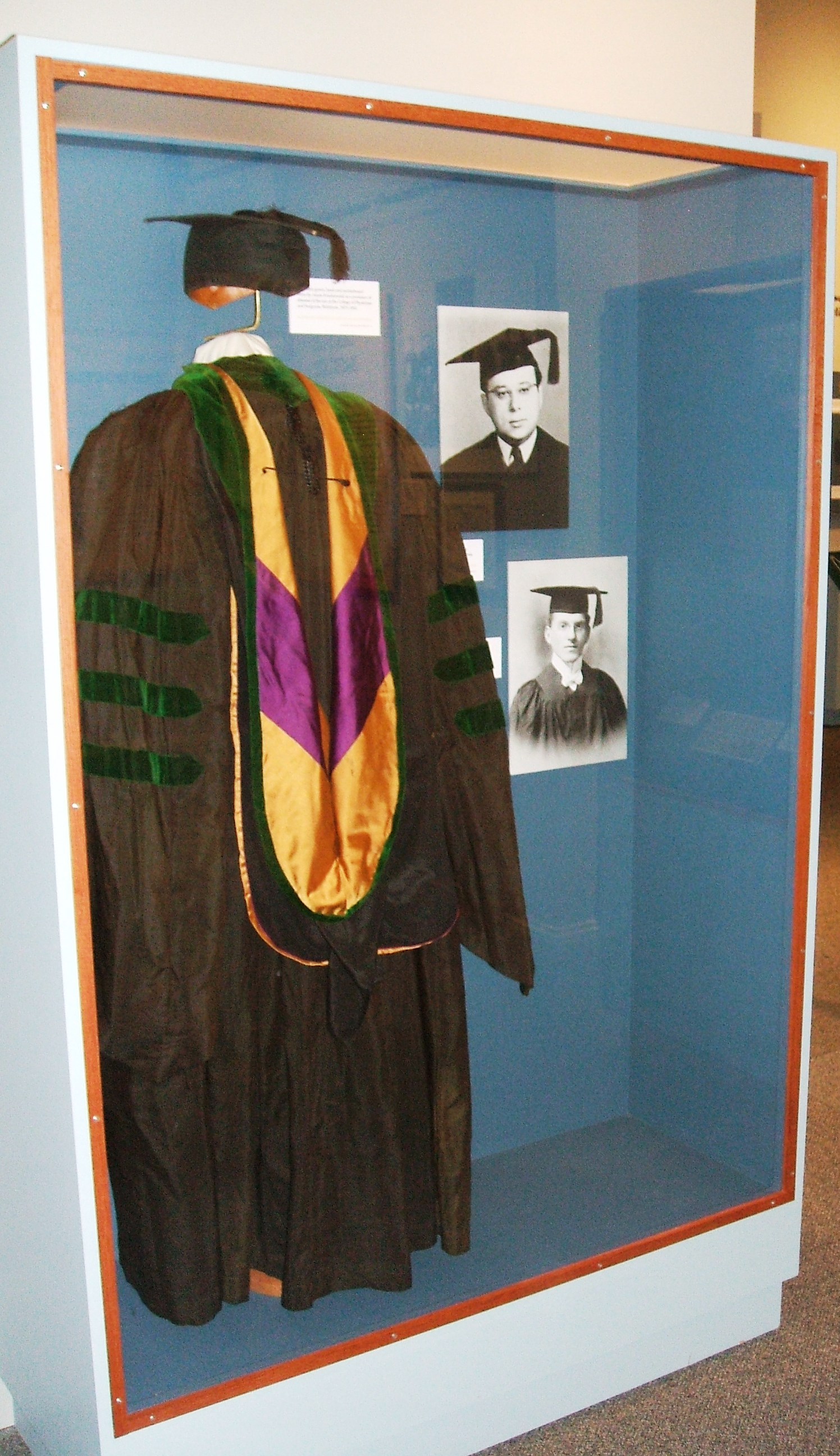 Along with Dr. Aaron Friedenwald’s academic gown and hood, we also have on display his tasseled mortarboard cap.

The cap consists of a flexible wool “skull” or fitted cap, edged with black twill and lined with leather, topped with a stiff board, twelve inches square, covered with a fine black wool.  The cap gets its name from the “hawk” mortar boards used by masons and plasterers, which it closely resembles (if you wore a plasterer’s hawk on your head).  In the center of the board is a black velvet button, from which hangs a short black tassel.

Like Dr. Friedenwald’s gown, his cap shows wear and tear – dented corners, frayed binding, an overall faded look – indicating it was worn and used for many years.  It also has his name stamped in the underside, probably so that fellow professors would not make off with each other’s caps accidentally.

Our cap does not have the manufacturer’s label, but it may have been made by Cotrell & Leonard of Albany, NY.  The firm of hat makers was founded in 1832; in the late 19th century Gardner Cotrell Leonard began developing a standard of academic regalia designs, and naturally his family’s firm was involved in their manufacture, soon becoming one of the leading providers of caps, gowns, and hoods in the U.S.

“…The Oxford cap, or Mortar Board. The cap with stiff skull part is still used, but has been displaced in best outfits for men by that with a folding skull part, an improvement which admits of carrying easily when off the head and packing compactly at any time. [Dr. Friedenwald’s cap is of this “improved” variety.] It fits a man’s head more comfortably, stays on more firmly and cannot get out of shape unless the flat board is broken…. The boards of all caps properly made are proofed with shellac to resist rain.”

-From The Cap and Gown in America, Gardner Cotrell Leonard, 1896

As for the short tassel, which is missing the long string from which most modern-day graduation tassels depend, this is original to the cap – but I’ve not found anything that describes the difference between the two types, both of which can be seen in images from the late 19th and early 20th centuries. Leonard’s 1896 treatise shows the short variety – on both women and men – and, just for fun, here’s William Lyon Mackenzie King, the tenth Prime Minister of Canada, with his short-tasseled Harvard doctoral cap, in 1919.