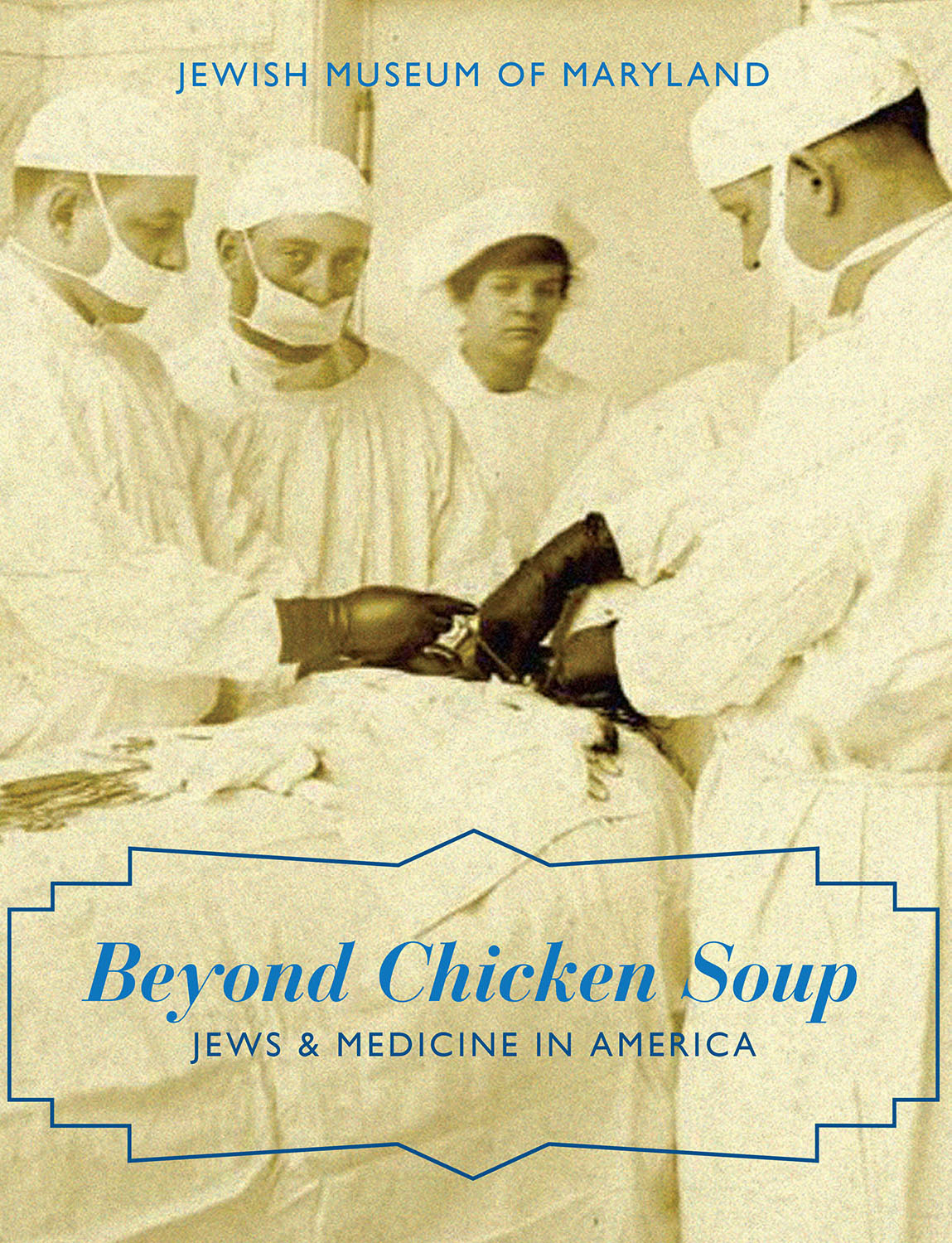 An exhibition on Jews and medicine presented us with an ideal opportunity to apply a historical perspective to illuminate how scientific and cultural concerns have intertwined to shape not only the American Jewish experience, but an important field of human endeavor. Moreover, because our museum is based in Baltimore and surrounded by world-renowned hospitals and medical schools that are at the forefront of medical innovation, the topic offered a chance to connect with our community’s heritage and to draw on our rich collection of materials dealing with the local experience of Jews in medicine.

While packed with information and insights, the Beyond Chicken Soup exhibit necessarily leaves out a great deal. To extend our investigation, this catalog features essays by four distinguished authors who delve more deeply into the exhibit’s themes. In the opening essay, “Strangers and Healers: The Jewish Immigrant Body and Healthcare’s Role in the American Assimilation Experience,” Alan Kraut examines how medicine served as a vehicle for assimilation and acculturation for American Jews. Kraut contends that the campaign to encourage Jewish immigrants to adapt a healthy and fit lifestyle, based on American standards, was a response to antisemitic characterizations of the Jewish body as diseased and weak.

In “Physicians and the Jewish Contribution to Medicine,” Mitchell Hart expounds on how American Jewish doctors and other writers sought to challenge antisemitism by highlighting Jewish medical achievements from antiquity to the modern period. Hart shows how these writers used the increasingly prestigious field of medicine to emphasize Jewish contributions to Western civilization at a time when antisemites were becoming ever more vocal in blaming Jews for society’s ills.

Cara Rock-Singer challenges the male-dominated narrative of the history of Jews and medicine through an exploration of Hadassah activists in her essay, “Nurturing Jewish Bodies: Hadassah’s Holistic Medicine for American Women and the Jewish Nation.” She focuses on how the women of Hadassah pursued an expanded notion of healthcare that drew on both Jewish tradition and scientific discourse to elevate the role that women played as caregivers as well as shapers of a modern Jewish culture.

An exhibit on the subject of Jews and medicine would not be complete without an acknowledgment of the role of media in influencing American attitudes. Ted Merwin analyzes how cultural stereotypes are reflected in the way that TV and movies have depicted Jewish doctors in “My Son (or Daughter) the Doctor: Jewish Physicians in American Popular Culture.” Drawing from a wide range of source material from early vaudeville routines to classic TV shows such as Northern Exposure, Merwin examines the roots of common tropes and stereotypes.

Explore this section further for excerpts from the catalog and more!

Excerpted from My Son (or Daughter) the Doctor: Jewish Physicians in American Popular Culture By Ted Merwin, associate professor of Judaic Studies at Dickinson College   One of the most popular vaudeville skits of all time, first performed in the 1920s, takes place in a doctor’s office and is set at the time of the […]

Excerpted from Chicken Soup: Women and the Making of the Modern Jewish Home and Nation By Cara Rock-Singer Hadassah used its founding holiday to bring all of Palestine together in the cause of healthy living: Purim became Health Day, an annual celebration featuring events and exhibitions held at schoolhouses, synagogues, and other venues across the […]

Excerpted from Strangers and Healers: The Jewish Immigrant Body and Health Care’s Role in the American Assimilation Experience by Alan M. Kraut, professor of history at American University   Beginning in the 1850s, a physician was often the first American with whom immigrants made eye contact—even before gaining admission to the U.S. Immigration depots were […]