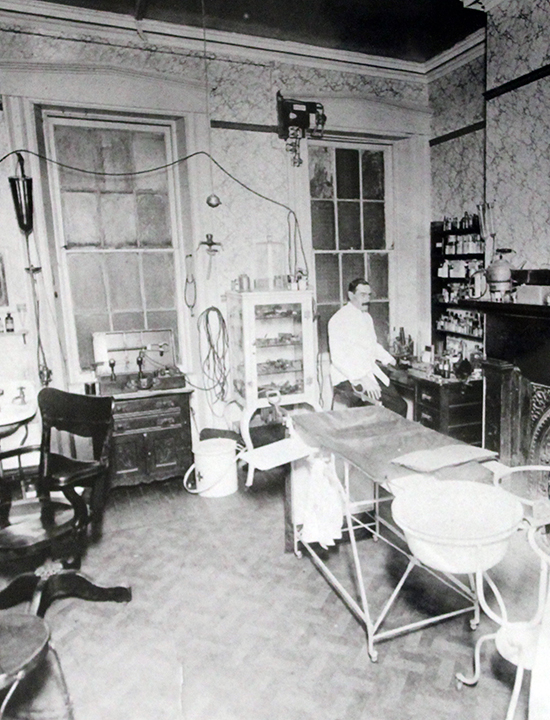 A Golden Age of American Medicine:

The rapid pace of scientific discovery that began in the early 20th century launched a “golden age” of medicine. As deadly diseases became curable and medical innovations improved quality of life, physicians rose to unprecedented heights of public admiration. By mid-century, Americans placed near-total trust in the medical profession.

This section explores how the “Jewish doctor” became a well-known cultural figure…and how Jewish patient activists began to question whether “the doctor knows best.”

We wanted to do something about those doctors who were condescending, paternalistic, judgmental, and non-informative.

~ Boston Women’s Health Collective in Our Bodies, Ourselves, 1973

According to his descendants, Isaac Walsky of Baltimore “started as a tailor” (he later dabbled in real estate investment), and the family suspects that the idea for this invention – a type of undergarment for men suffering from inguinal hernias of the groin – came about because Mr. Walsky lived close to the Johns Hopkins […]

Ronald Krome,  A Health Hero in emergency medicine, nominated by his brother, Dr. Sidney Krome. By all accounts, Dr. Ronald Krome (1936-2013) was “one of the most important and influential leaders in the formation of emergency medicine as a United States specialty.” He was an emergency room physician who walked the walk, as well as […]

Dr. Wen at the JMM

We were thrilled to welcome Dr. Leana Wen, Baltimore’s health commissioner on Sunday August 7th for Medicine’s Next Frontier: The Power of Public Health. Dr. Wen’s strong, fact-based presentation was enlightening for the whole audience, medical practitioners and lay leaders alike.  The proof of her effectiveness was the large number of questions she received from […]

Some books should be read by everyone. Subtitled “A Doctor’s Reflections on Race and Medicine,” this candid discussion of race and culture demonstrates the power of the domain of medicine. Dr. Tweedy places his personal story of becoming a physician at the service of a much-needed discussion of the impact of race on health and […]

The doctor’s office vignette in Beyond Chicken Soup features Dr. Morris Abramovitz (1879-1951), with a particular focus on his patented “Combined Method” apparatus for treating venereal diseases. We included Abramovitz’s apparatus itself, some of his advertising techniques, and the official copy of the certified patent, complete with ribbons and seal. What you may not know […]

In the doctor’s office vignette, we have five framed color prints depicting ‘great moments’ in medical history.  More than just set dressing, these prints – and a sixth, in a more prominent spot around the corner – represent typical (or at least idealized) medical office décor of the mid 20th century. In the late 1940s, […]

The Beyond Chicken Soup exhibition honors a short and eclectic list of Marylanders who have contributed in diverse ways to medical history: our Hometown Health Heroes. Not only did we whittle our selections down to a mere dozen, we had to describe their careers in only fifty words!  This series of blog posts seeks to […]

Today’s hero is Senator Rosalie Silber Abrams (1916-2009), selected for posting now because the March 2016 Women’s History Month theme is “Toward a More Perfect Union,” honoring women in public service or government. Folks from Baltimore know the Silber name. The Silber family ran a well-known and much loved bakery that at one time included […]

The Things They Carry

What exhibition about medicine would be complete without a black leather bag— you know the one—double handles, maybe a strap and buckle on the side? This bag remains linked to the popular image of the doctor, even fifty years after the almost complete disappearance* of the house call. It was, and some argue still is, […]

With all the Jewish doctors to choose from—once and today, in Baltimore and beyond—why does Dr. Morris Abramovitz (1879-1951) feature so prominently in Beyond Chicken Soup: Jews and Medicine in America? In the beginning, we focused on Dr. Abramovitz because we could. Thanks to his grandchildren, the JMM has a collection of his effects, including […]