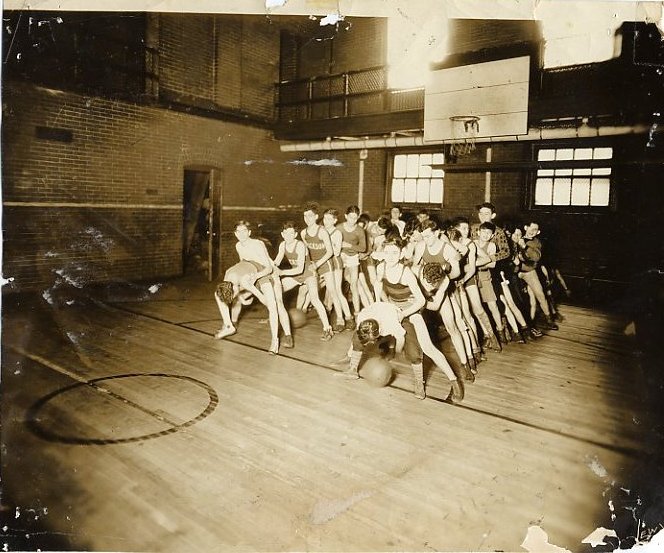 In the late 19th and early 20th centuries, interest grew in the physical, educational, and moral benefits of athleticism, particularly for children.  Educators and reformers worked on to introduce gymnastics into school curricula, build playgrounds for children, and promote physical activity from a young age.  By the 1920s, however, attention turned to the needs of adults.

In 1924, President Coolidge addressed the first National Conference on Outdoor Recreation, noting that as more and more American jobs turned to “purely clerical activities,” physical exercise must be supplemented through other opportunities for (as he stated several times) “both old and young.” Around the same time, the National Park Service and the National Education Association turned their attention to the organized sports, and spaces in which to play them. It was time for public parks to make room for ball fields and courts amongst the bucolic vistas and greenery.

Maryland was already in the game, so to speak; the Public Athletic League had been organizing sports games for Baltimore’s young adults since 1908.  In 1922, it merged with the Children’s Playground Association of Baltimore City to form the Playground Athletic League, providing services in “the Playground Department, embracing the free play and motor activities of children under ten years of age; the Athletic Department, directing the organized, competitive athletic contests of adolescent boys and girls; and the Adult Recreation Department, handling the larger problems of community recreation and the intelligent use of leisure.”

As part of its mission, the PAL (as both the Public and Playground versions were known) organized athletic competitions and tests of “efficiency” for “school children, as well as the boys and girls who may not be attending school, and also the people at large.” A glance through the 1922 handbook shows that the group was very busy, with divisions in each county across the state, and a separate branch serving Baltimore’s African-American community. PAL employed a wide number of men and women, from coaches and “play leaders” to nurses and mucisians.

Both versions of the PAL provided opportunities for Jewish organizations like the Young Men’s and Women’s Hebrew Associations, the Jewish Educational Alliance, and the Hebrew Orphan Asylum – all of which are represented in the 1910s-1920s PAL listings – to participate in Baltimore’s recreation community.  The JEA boys seem to have done particularly well in the institutional basketball competitions; for example, in the Fifteenth Annual Institutional Basket Ball Tournament of 1923 – in which “great interest and enthusiasm marked the season, which furnished an entry of 68 teams and 539 players” – there were six age/weight classes in competition, and the JEA won five of them.

True, this photo predates this week’s “Fitness Fad” time frame a bit, but it’s too good to pass up.  These nine boys from the JEA posed while participating in a Public Athletic League event in 1914.  Lee L. Dopkin (front row, second from left) won several PAL medals during the 1910s, including the linked set shown here attached to a general PAL badge.  These rectangular medals were awarded to Dopkin (for his relevant age/weight class) in: (top to bottom) Broad Jump, 1910; Dodgeball, 1912; Potato Race, 1915; Dodgeball, 1910; Dodgeball, 1913; Basketball, 1914.

Despite economic setbacks during the Depression, the PAL continued to provide athletic and exercise options for the youth of Maryland. In 1940, the various private sports and recreation organizations in Baltimore – of which PAL was only one – were merged into a newly formed Baltimore City Department of Public Recreation, which in turn merged with the City’s Parks Department in the late 1940s; other county and municipal governments took up the slack in their own areas.  Today, we may take our local Parks and Recreation Departments for granted, but it’s worth remembering the men and women, staff and participants, who worked to make sure that recreational sports were available to all, not only school children.

For more on the history of public recreation in Baltimore, see The Play Life of a City: Baltimore’s Recreation and Parks 1900-1955, by Barry Kessler and David Zang, 1989, or the other resources listed here.