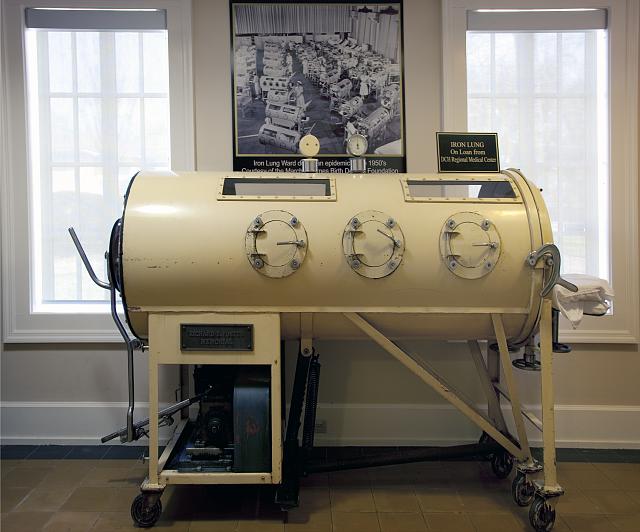 A recent comment left in “Beyond Chicken Soup” mentioned the visitor’s wish to learn more about “polio before the vaccine.”  We mention the disease briefly, but in an exhibit that covers so much ground, we did not have the space to devote more than a photo to the topic.

Baltimore has an important link to the fight against polio: When developing the successful vaccine Dr. Jonas Salk used cells from the HeLa line, which came from samples taken from Henrietta Lacks of Dundalk. Mrs. Lacks has been in the spotlight this week, thanks to the news that Oprah Winfrey will star in, as well as produce, a film version of her story. And on a purely personal note, since I’m several seasons behind in my “Call the Midwife” viewing, I only just saw the several-years-old episode where a character is confined to an iron lung.  Thus, our visitor’s comment came at an opportune time, and I decided to see if we could provide an answer.

However, I’ve not found much in our collections themselves. Poliomyelitis was a major threat in the early-mid 20th century, certainly, but almost in a run-of-the-mill way; for many people, their main connection to polio is the remembered frustration of not being allowed to go to the local swimming pool or movie theater during the dangerous summer months, when the disease was prevalent. In Gil Sandler’s Jewish Baltimore: A Family Album, Murray Miller recalled that in 1944, polio struck several boys at his camp, despite parents’ hope that a summer in the country would keep their kids out of harm’s way.  Dr. Henry Seidel recounted to a Baltimore Sun reporter his memories of working at Baltimore’s Sydenham Hospital for Communicable Diseases from 1946 to 1953; the hospital had special red ambulances just for polio victims, because of fear of contagion.  Local charitable organizations raised funds to purchase negative pressure ventilators, more commonly known as iron lungs, for city hospitals, since there was an ever-present need.

That being said, the stories of Jewish Marylanders who suffered during the many polio outbreaks are not well represented in our collections.  If you’re interested in the broader story, there are many resources available online, including this in-depth feature on NPR from some years ago, which includes several photographs; and for a more local look, here’s a photo of a polio ward at Baltimore Children’s Hospital on Getty Images.