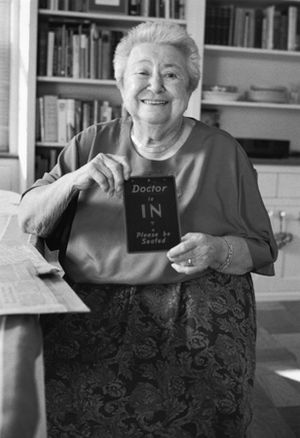 Ruth Finkelstein grew up with her parents and four siblings in New York City and attended the Jacobi School, a private Jewish school for girls. From a young age, her father wanted her to be a doctor, and Ruth agreed. She attended Johns Hopkins University for undergraduate, earning her bachelor’s degree in 1930.

Finkelstein did an internship with Sinai Hospital, but was unable to complete a residency in gynecological surgery. She was not permitted to study surgery due to the lack of living quarters for women at the hospital.

After being turned away form gynecological surgery, Finkelstein turned to women’s health and family planning. She did a two-year apprenticeship in obstetrics and eventually began working in the Bureau for Contraceptive Advice.

In 1938 Finkelstein opened her own practice. While maintaining her own practice, she also worked as a clinician for Planned Parenthood and headed the Birth Control Clinic and the Adolescent Clinic at Sinai Hospital. In 1964, Finkelstein began a family planning program with the Baltimore City Health Department.

In 1990, Finkelstein retired and closed her private practice. She passed away at the age of 93.